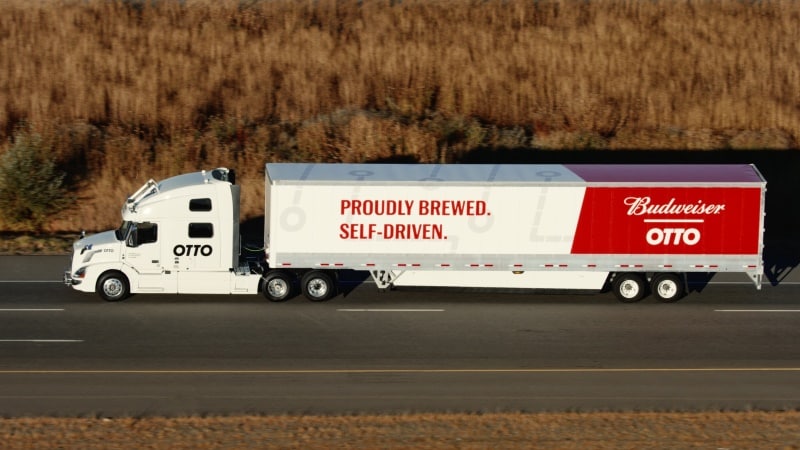 If you drank a cold beer in Colorado Springs this weekend, it may have been delivered by a self-driving truck.

That's where a big rig tricked out with a sophisticated system that lets a computer take control on the road delivered 50,000 cans of Budweiser last week - in what the beer company says was the first commercial delivery using the tech.

The truck that made the 120-mile journey is one of a handful of Volvo rigs equipped with tech developed by Otto, a startup Uber acquired in August.

Unlike other self-driving systems on the market, such as Tesla's autopilot, Otto's tech lets drivers get out from behind the wheel altogether.

At least when it's on the highway and doesn't have to watch out for things like cyclists and pedestrians, that is. Human drivers still have to take control when the vehicle isn't on an interstate.

Industry watchers have long predicted that autonomous vehicles would transform businesses like trucking and mining before taking over the consumer market.

That could mean big business for companies like Otto because nearly 70 percent of all freight in the US is delivered via trucks, according to American Trucking Associations.

The trade group has also estimated that a major labor shortfall could leave some 175,000 trucker jobs unfilled by 2024.

Not having to be glued to the steering wheel for an entire trip might attract more people to the profession - at least as long as the trucks actually need drivers.

Microsoft Teams Is the Company's Slack Rival, Expected to Launch on November 2: Report