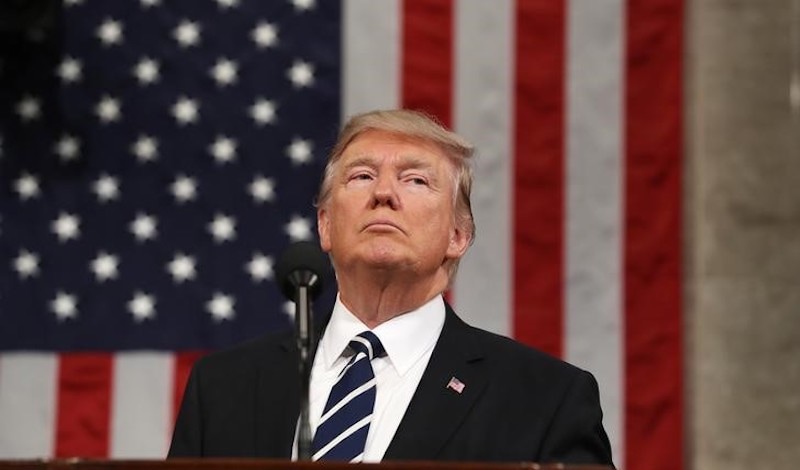 "Our sentiment has not changed: President Trump's immigration ban is unjust and wrong," Uber, the ride-hailing company, said in a statement.

"Barring people from entering our country because of where they're from was wrong the first time around - still wrong..." tweeted Airbnb chief executive Brian Chesky.

A month ago, technology companies were among the loudest critics of Trump's initial travel ban, which immediately imposed restrictions on visas for visitors from seven countries. A national uproar followed. More than 100 tech companies - including Apple, Google and Microsoft - signed onto a court brief supporting one of the several court cases filed against the ban. Trump's new travel ban is aimed at avoiding these legal challenges. It imposes a 90-day ban on new visas for citizens from six Muslim-majority countries. It is scheduled to take effect in 10 days.

But Silicon Valley's core objections were not assuaged by the new language.

"I think we're going to see the same fight," said Neil Ruiz of George Washington University's Center for Law, Economics, and Finance. "And for employers, a lot of uncertainty."

Adding to tech companies' worries, the Trump administration announced Friday that it would temporarily stop allowing expedited applications for H-1B visas - a change that is seen as a prelude to a broader overhaul of a visa system widely used by tech companies to hire foreign workers. The visa program has been criticized by both Republicans and Democrats as a way for companies to hire cheaper foreign workers, displacing American ones. In December, Trump said one of his first executive orders would be to order an investigation into visa abuses. That executive order still has not been signed.

The US Citizenship and Immigration Services (UCIS) said it will stop "premium processing" beginning April 3 for up to six months. The faster handling cut wait times for H-1B visas from a few months to as little as 15 days. The agency said the change was needed to handle a significant surge in "premium processing" requests in recent years and to allow more time to address older visa requests.

These two actions by Trump's administration have stirred a high level of anxiety among chief executives and their workers, said Ali Noorani, executive director of the National Immigration Forum, a DC-based lobby group.

"Frankly there is just a lack of stability within our economy right now because of these actions," Noorani said. The Trump administration, he said, is "making it pretty clear to the nation's companies that depend upon immigration that we are going to close the American economy off from the world - either by action or by tone."

He said the full range of Trump's immigration-related orders will undermine how companies grow in the US, and impact whether companies see the US as a place they want to conduct business. The industries affected by Trump's broad rhetoric and actions include tech, health care, higher education and agriculture.

Idaho dairy producers, for example, depend heavily upon immigrant workers to milk half a million cows each day, Noorani said. An increasing number of workers there are refugees. "How is a dairy farmer in Idaho going to operate in this environment?"

But some scholars studying immigrant visas and the American workforce believe the impact of the H-1B visa decision is being overblown.

The government had previously suspended premium processing for two months in 2015 when spouses of certain visa holders became eligible to work and their applications needed to be processed in a timely manner, said Ron Hira, a public policy professor at Howard University specializing in high-skill immigration and the American engineering workforce.

"There have been a lot of complaints over the years that USCIS isn't properly checking credentials," said Hira, whose book "Outsourcing America," examines the economic and policy implications of the offshoring of high-skilled jobs. "Stories of fake resumes have been increasing over the last few years."

Hira also said that Trump's renewed ban impacts a very small number of H-1B visa applicants from those countries. The countries affected by Trump's ban account for less than half a percent of H-1B visas approved in 2013, he said.

The top H-1B visa sponsor last year was Infosys, an Indian multinational corporation providing information technology and outsourcing services. It filed 25,405 applications, according to Myvisajobs.com. An Infosys spokesman said Monday the company is not commenting on Trump's executive order.

Trump said during his joint address to Congress last week that he wanted to move toward a "merit based" visa system. He has said he wants to investigate whether the current visa system is hurting American workers.

Lynden Melmed, an immigration attorney who had served as UCIS chief counsel within the Department of Homeland Security under President George W. Bush, said eliminating expedited processing could bring major disruption for workers and companies.

Applicants are barred from traveling while a change in visa status is pending, so an increase in processing time could prevent foreign graduates of US universities from leaving the country or be stuck outside while they are waiting for approval, Melmed said.

"They are taking away the escape hatch for people who can't wait for regular processing times," said Melmed, who also serves as executive counsel for Compete America, a coalition of mostly tech companies advocating for immigration reform to benefit high-skilled foreign workers.

Employers will be watching the clock closely. Current regulation grants workers whose H-1B visa status is set to expire an automatic eight-month extension. Without expedited processing, those employees will not be allowed to work if their new H-1B visa is not granted within those eight months.

"The time frame for when an employee can start or whether they can continue working is now taken out of the company's hands and subject entirely to government processing times," Melmed said.