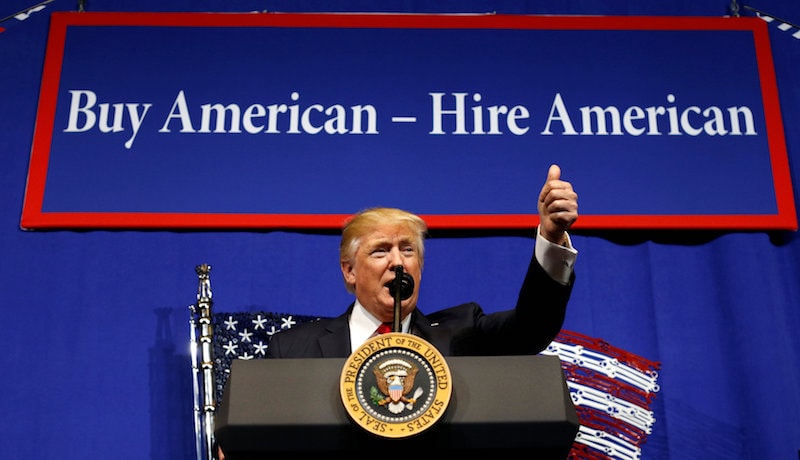 President Donald Trump on Tuesday ordered a review of the US visa programme for bringing high-skilled foreign workers into the country, putting technology firms and the outsourcing companies that serve them on notice that possible changes may be ahead.

Seeking to carry out a campaign pledge to put "America First," Trump signed an executive order on the H-1B visa programme. It was vague on many fronts, and did not change existing rules, but one objective, said Trump aides, is to modify or replace the current lottery for H-1B visas with a merit-based system that would restrict the visas to highly skilled workers. Indian nationals are the largest group of H-1B recipients annually.

Such a change could affect companies, such as Tata Consultancy Services, Cognizant Tech Solutions and Infosys, that connect US technology companies with thousands of foreign engineers and programmers. None responded to requests for comment.

Trump announced the order and made remarks at a visit to the headquarters of Snap-On, a tool maker in Wisconsin.

In addition to addressing the visas issue, he also ordered a review of government procurement rules favouring American companies to see if they are actually benefiting, especially the US steel industry.

"With this action, we are sending a powerful signal to the world: We're going to defend our workers, protect our jobs and finally put America first," Trump said.

Trump was a businessman before he was elected president last year, and his companies have been criticized for using visa programs to fill positions at Trump properties with foreign workers. Trump-branded products are also made overseas.

100-day benchmark
As he nears the 100-day benchmark of his presidency, Trump still has no major legislative achievements. With his attempts to overhaul healthcare and tax law stalled in Congress, Trump has leaned heavily on executive orders to change policy.

It was unclear whether the latest such order would yield immediate results. The H-1B visas section included no definite timeline. The government procurement section did.

"We hope the goal of President Trump's executive order on the H-1B programme is 'mend it, don't end it,'" said Robert Atkinson, president of the Information Technology and Innovation Foundation, a technology industry group.

Going to a more merit-based H-1B system could attract more people with advanced science and technology skills, Atkinson said in a statement. But he said some ideas could make the system ineffective, such as requiring advertisement of job openings for long periods to prove the unavailability of US workers.

Democrats said Trump's order was not strong enough, and too late, after thousands of visas were awarded this month in this year's lottery.

"For a president who has prided himself on his swift action when it comes to immigration, an interagency review of the programme is a guarded and timid approach. It's too little, too late," said US Senator Dick Durbin, the No. 2 Democrat in the Senate.

Critics of the programme say most H-1B visas are awarded for lower-paid jobs at outsourcing firms, many based in India. That takes work away from Americans, lowers wages and keeps Americans from being trained in tech-related fields, they say.

"Right now, widespread abuse in our immigration system is allowing American workers of all backgrounds to be replaced by workers brought in from other countries," Trump said.

Tech companies have been bracing for Trump to make changes to the H-1B programme. The visas are intended to go to foreign nationals in occupations that generally require specialised knowledge, such as science, engineering or computer programming. The government uses a lottery to award 65,000 visas yearly and randomly distributes another 20,000 to graduate student workers.

"Right now H-1B visas are awarded in a totally random lottery and that's wrong. Instead, they should be given to the most skilled and highest paid applicants and they should never, ever be used to replace Americans," Trump said.

More than 15 percent of Facebook's US employees in 2016 used a temporary work visa, according to a Reuters analysis of US Labor Department filings. Facebook did not respond to requests for comment.

Infosys, India's No. 2 IT services firm, has said previously that it is ramping up work on on-site development centres in the United States to train local talent in an effort to address the visa regulation changes under consideration.

It warned last week that onerous changes to US visa rules could affect its earnings.

Nasscom, the Indian IT service industry's main lobbying group, said it backs efforts to root out H-1B abuses, but said the idea that H-1B visa holders are cheap labour is inaccurate.