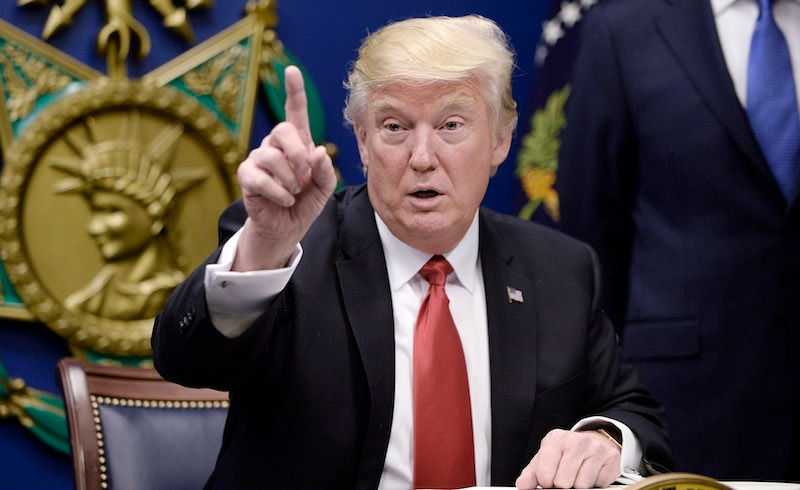 The US government on Monday defended President Donald Trump's travel ban as a "lawful exercise" of his authority, and urged an appeals court to reinstate the suspended measure in the interests of national security.

An hour-long telephone hearing has been set for Tuesday at 3:00pm (11:00pm GMT) in a high-stakes case that looks increasingly likely to be settled by the Supreme Court.

Two new polls show a majority of Americans now oppose the travel ban on refugees and travellers from seven mostly-Muslim nations, which sparked airport chaos and condemnation around the world - but Trump has shown no sign of bending, pushing back late Monday in a new Twitter salvo.

"The threat from radical Islamic terrorism is very real, just look at what is happening in Europe and the Middle-East. Courts must act fast!" he wrote.

Earlier in the day, during a visit to US Central Command in Tampa, Florida, Trump accused the media of downplaying the terror threat which his administration cites to justify its ban, saying they purposefully ignored jihadist atrocities.

Asked to explain Trump's comments, White House spokesman Sean Spicer promised to "provide a list" of attacks that had been "underreported."

Court 'erred'
Trump's decree summarily denied entry to all refugees for 120 days, and travelers from Iran, Iraq, Libya, Somalia, Sudan, Syria and Yemen for 90 days - a move critics charge will damage US interests. Refugees from Syria were blocked indefinitely.

The president says the ban is needed to tighten US security against foreign terror threats, citing the September 11, 2001 attacks despite the hijackers having no links to the named countries.

In its filing to the Ninth Circuit Court of Appeals in San Francisco, the government argued that the federal court which temporarily rolled back Trump's directive had "erred in entering an injunction barring enforcement of the order," asking that the ban be reinstated.

The Justice Department argued that "the executive order is a lawful exercise of the president's authority over the entry of aliens into the United States and the admission of refugees."

"Even if some relief were appropriate, the court's sweeping nationwide injunction is vastly overbroad," it said.

The government again denied that the order specifically targets Muslims, defending it as a means to review and revise screening procedures in order to "protect against terrorist attacks."

And it said non-US citizens seeking to enter the United States for the first time have no constitutional rights to be upheld.

Mounting opposition
Friday's decision by a federal judge in Seattle has allowed the many travellers who were suddenly barred from US soil to start trickling back in.

The State Department has said visa holders from the seven countries are allowed to travel to the US as long as their documents have not been "physically cancelled."

On Sunday, the appellate court refused to overrule the federal judge.

Attorneys general for the states of Washington and Minnesota, which won the temporary stay of the ban, have asked the appeals court to refuse to reinstate it. They were backed Monday in a court brief filed by attorneys general from 16 other US states.

Several legal and rights groups have filed in support of the states, including the Southern Poverty Law Center, Americans United for Separation of Church and State and the American Civil Liberties Union.

And in an additional blow, a slew of Silicon Valley giants led by Apple, Facebook, Google, Microsoft and Twitter have filed a brief in support of the lawsuit, arguing that the ban threatens their ability to attract crucial foreign talent and investment to the United States.

Tesla and SpaceX were among another 30 companies that added their names to the filing late Monday, pushing the total to more than 120.

A group of prominent Democrats including former secretaries of state John Kerry and Madeleine Albright added their voices to the criticism, arguing that Trump's ban could endanger US troops in the field, disrupt counterterrorism cooperation and feed Islamic State group propaganda.

Spicer insisted the administration was "absolutely not" planning to back down on its plan for extreme vetting at US borders, saying: "Once we win the case, it will go right back into action."

But top Republicans have shown renewed signs of discomfort with the president as the controversy escalates - specifically over Trump's virulent attacks on James Robart, the Seattle federal judge.