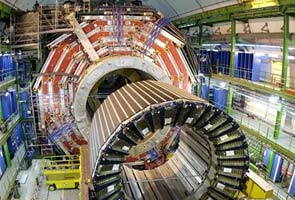 Here is a snapshot of the Large Hadron Collider (LHC), leading the quest to identify a sub-atomic particle known as the Higgs boson, which is believed to confer mass.

1. The LHC comprises four huge labs interspersed around a ring-shaped tunnel near Geneva, 27 kilometres (16.9 miles) long and up to 175 metres (568 feet) below ground.

2. Beams of hydrogen protons are accelerated in opposite directions to more than 99.9999 percent of the speed of light. Powerful superconducting magnets, chilled to a temperature colder than deep space, then "bend" the beams so that streams of particles collide within four large chambers.

3. The smashups fleetingly generate temperatures 100,000 hotter than the Sun, replicating the conditions that prevailed just after the "Big Bang" that created the Universe 13.7 billion years ago.

4. Swathing the chambers are detectors that give a 3-D image of the traces of sub-atomic particles hurled out from the protons' destruction. These traces are then closely analysed in the search for movements, properties or novel particles that could advance our understanding of matter.

5. In top gear, the LHC is designed to generate nearly a billion collisions per second. Above ground, a farm of 3,000 computers, one of the largest in the world, instantly crunches the number down to about 100 collisions that are of the most interest.

6. Peak LHC collisions generate 14 teraelectron volts (TeV), amounting to a high concentration of energy but only at an extraordinarily tiny scale. One TeV is the equivalent energy of motion of a flying mosquito. There is no safety risk, says CERN (the European Organisation for Nuclear Research).

7. Other LHC investigations include supersymmetry -- the idea that more massive particles exist beyond those in the Standard Model -- and the mystery why anti-matter is so rare compared to matter, its counterpart. Supersymmetry could explain why visible matter only accounts for some four percent of the cosmos. Dark matter (23 percent) and dark energy (73 percent) account for the rest.

Nintendo does a Wii U-turn, may charge for deep online gaming
Nokia to launch Lumia 610 and Lumia 900 in India tomorrow