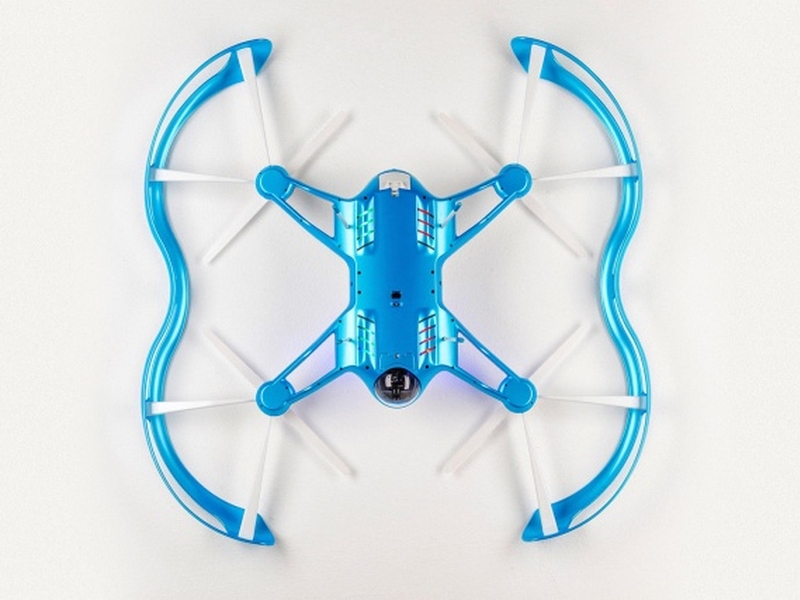 Want a drone camera that beams images directly into your eyes? The FLYBi drone comes with a pair of virtual reality goggles, so you can get first person video from the drone. There's also a regular remote with a screen built-in, so you can learn to fly properly before you take your eyes off the controls, or one of your friends could fly the drone for you. The goggles also track head movement, and can use that to orient the drone camera, so you literally look around from the drone's point of view.

According to the Kickstarter page, there is an object avoidance system built into the drone, so even if you're not watching where you're going, you should be able to pilot the drone safely, and it uses radio frequency to transmit the video to your headset, which means you can take it well past Wi-Fi range. A companion app allows you to stream your footage as well, and this means that you can livestream your app footage while the drone is up in the air.

The camera gimbal is limited to 55-degrees, which will allow you to look around without losing track of the motion - this will help with motion sickness, and also keep you from flying off into the wrong direction. The built in camera films 1080p video, and can also take 12megapixel photos.

Here's a video explaining the project:

The FLYBi has a $50,000 goal (approximately Rs. 33.5 lakh), and has so far raised over $30,000 (approximately Rs. 20 lakh), with 39 days to go. The project will accept funding until January 25, but the drone is not cheap. The early bird, beginner flight set, which isn't compatible with the VR Goggles, will set you back by $495 (approximately Rs. 33,000), and the Bird's Eye version, which includes the VR Goggles, will cost you $729 (approxiately Rs. 48,000) - and it's $799 (approximately Rs. 53,500) if you miss the early bird price. That's actually fairly reasonable considering the cost of most quadcopters with cameras that are on the market today, but before putting your cash down, remember that there is a chance that the Kickstarter won't work out, and don't pledge the money if you can't afford to write it off.

For example, there's the SDJ, a Back to the Future inspired self-drying jacket; the ReadySip smart beverage temperature monitor; and the Auroma One smart coffee machine.

Who Is the Worst Star Wars Movie Character? It's Not Jar Jar Binks
Yu Yutopia Launched in India: Price, Specifications, and Everything You Need to Know