The course is the star of a celebrity's game 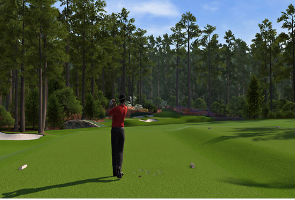 Highlights
As a multiracial American who likes golf, I once revered Tiger Woods from afar. Then, after meeting him and learning that he could talk about video games the way a normal dude does, I thought I actually liked him as a person. So when he humiliated his wife and family (not to mention himself) in front of the entire planet with his spectacular sexual self-immolation, I was as disgusted and disillusioned as any fan could be. Heading into this week's Masters tournament, I am not rooting against him. But for whatever trouble he is having getting his game and his life back together, I, like millions of others, have zero sympathy.

Neither do many of the sponsors who helped make Mr. Woods the very definition of marketing ubiquity. But one company that has continued to release major, mass-market consumer products under the Tiger Woods brand is Electronic Arts, the game giant.

Even within his own videogame franchise, however, Mr. Woods now finds himself taking a back seat to inanimate terrain. And that is because the real star of Tiger Woods PGA Tour 12: The Masters, released recently by Electronic Arts for the Xbox 360, Wii and PlayStation 3, is not Mr. Woods but the hallowed ground of Augusta National Golf Club, the tournament's home in Georgia.

Putting aside the fact that Mr. Woods's face does not even appear on most retail versions of the product, it is perhaps inevitable that the inclusion of Augusta would overshadow any individual player. Along with Pebble Beach in California and the Old Course at St. Andrews in Scotland, Augusta is among the world's most famous golf courses. While St. Andrews and Pebble have been rendered electronically over the decades I have been playing golf video games, this is the first time most people will have a chance to "play" Augusta National in their living rooms. (A version of the course was included in an obscure game released only in Japan in the 1990s, though that is hardly relevant for most players.)

Thankfully, Electronic Arts has produced a superb game worthy of the Masters moniker.
It probably comes as little surprise that I have not actually played the course in real life -- and sadly, I have never even attended the Masters -- so I can't tell you how accurate this digital reproduction is. But just as players don't really need to have driven Ferraris and Lamborghinis to appreciate a racing game, I need not have played the real course to tell you that my knees were literally shaking when I set up for my first tee shot at the renowned par-3 12th hole (known as Golden Bell).

They were shaking because I was standing up with my fingers interlaced around the motion-sensitive Move controller for the PlayStation 3, which is similar to Nintendo's Wii controller. But unlike the Wii, the PS3 and the Xbox 360 deliver Augusta and the other courses in the game with almost photo realistic high-definition rendering. With the Move and Wii controllers, you have to swing properly while the system analyzes the plane of the swing and the angle of your wrists as the ball flies off on its trajectory.

I played mostly on the PS3, and while the motion-sensing system wasn't perfect, it provided a new level of immersion. Try standing up and playing 36 holes with the PS3 Move, and then tell me your hips and shoulders aren't a little sore. One frustration could be that if you want to be effective, you have to keep your head down through impact, so you can't see where the ball is going until after you hit it. But that's the way real golf is, too.

You can also play in more traditional couch-potato modes, pressing buttons or twiddling thumbsticks (your only options on the Xbox 360). No matter which system you use, it is faithful to reality in emphasizing golf's short game as the key to scoring. Hitting huge drives down the fairway is no problem, but a tricky half-wedge from 50 yards out will test you every time, as it should. And while putting is difficult and precise, that is also as it should be.

This weekend, in the game's Live Tournament mode, players will be able to compete with the actual live leader board from the Masters. Now No. 7 in the world golf rankings, Mr. Woods may or may not be on that board. Either way, at least the latest video game with his name on it is a winner.
Comments