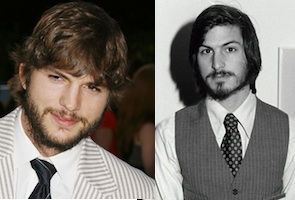 Highlights
We initially thought we are about to get Punk'd considering it's April 1, but this one looks legitimate. Ashton Kutcher is set to play Steve Jobs in a forthcoming indie movie called "Jobs".

As per reports in Variety, the movie will "chronicle Steve Jobs from wayward hippie to co-founder of Apple, where he became one of the most revered creative entrepreneurs of our time". The movie will be directed by Joshua Michael Stern and be based on a script by Matt Whiteley.

Apple co-founder Steve Jobs was born on February 24, 1955 in San Francisco, California and went out to start Apple Computer, Inc. (now called Apple Inc.) with Steve Wozniak in the 1970s. The company had success initially but came close to shutting down after Jobs was ousted from the company. But later Steve Jobs returned and turned the company around with products like iPod, iMac, iPhone and iPad, in what is regarded as one of the greatest comeback stories in corporate histories.

Though the details of the script are not known yet, the movie is also likely to delve into Steve's personal life. Jobs grew up as an only child, with a single mother and went on to marry Laurene Powell, with whom he had three kids. He also had a daughter, famously named Lisa (also the name of a computer Apple released), from an earlier relationship with Chris Ann Brennan, a Bay Area painter.

Ashton Kutcher is a 34 year old actor, most famous for his appearances in That '70s Show (as Michael Kelso), as host and producer of Punk'd and, most recently his portrayal of Walden Schmidt in Two and a Half Men.

Variety reporter has confirmed the story is indeed true:

We discussed holding it until Monday for fear of readers dismissing it as a joke, but felt it was too big a scoop to risk losing. It's TRUE!