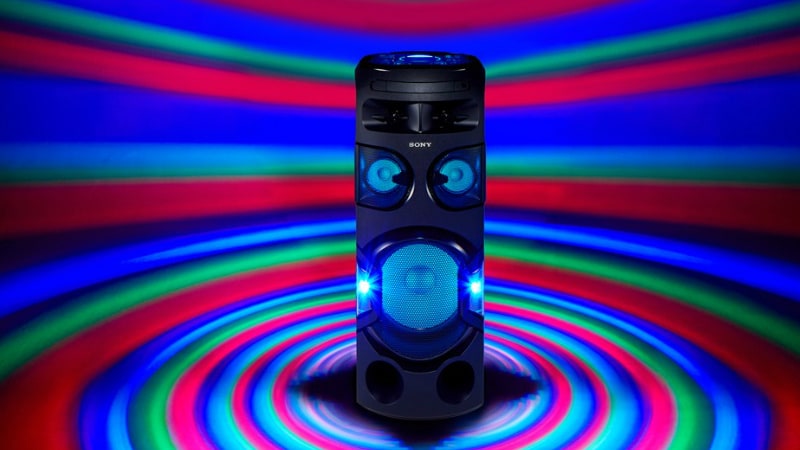 Sony India has launched three new audio systems in the country - the MHC-V81D, MHC-V71D, and MHC-V41D. All three are available across all Sony Center and major electronic stores in India. The prices of these box-style tower portable high quality audio systems start at Rs. 31,990, and the speakers come with a new Taiko mode, 360-degree party lights feature, DVD player built-in, Bluetooth and NFC support.

The Sony MH-V81D, the most expensive of the lot, is priced at Rs. 51,990. The audio system has a touch panel that understands gestures and motion; and is dustproof and splashproof. It comes with a Taiko mode which allows the user to use the touch panel like drums. The touch panel has a varied selection of drum samples that you can tap and make a play game out of. There are two mic inputs for guitar and mic connectivity, and it has mid, tweeter, and additional rear tweeter speakers for spreading direct sound over a wider area.

The MH-V81D supports 360-degree party lights that throw colourful lights across the room to change the mood of the party. Bluetooth compatibility allows for up to 50 systems to be connected and synced at one time. The Sony Music Center app lets you control music and sound settings from the smartphone. Plus the Fiestable app lets you control the light colours, and lets you activate DJ and karaoke modes.

There's also a Football Mode that lets you minimise narration volume and increase crowd cheers while a game is on, to give the feel of a live game watched in a stadium. There's also a built-in DVD player and HDMI output for TV connectivity. The MHC-V81D comes with wheels that let you shift the speaker to any room of the house by just rolling it around. It supports 360-degree live sound feature as well for high quality music output. Another unique feature is Digital Sound Enhancement Engine (DSEE) that boosts the quality of any compressed music files

The MH-V71D does not support 360 degree live sound, and does not don two additional rear tweeters. For that reason, it is priced at Rs. 41,990. Lastly, the MHC-V41D doesn't have a touch panel, no 360-degree live sound, or 360-degree party lights, and no wheels as well. There are no additional speakers at the back, and neither does it support Taiko mode. The Sony MH-41D is the cheapest of the lot priced at Rs. 31,990. All of the three audio systems are available in Black colour only.