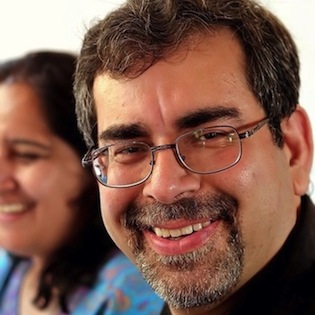 Frozen in time, his last tweet on Sunday morning was every bit Atul: right down to the smiley and an attached photo of a cat (his cousin's, in Berlin).

This morning, Atul Chitnis lost his year-long fight with advanced intestinal cancer that had also affected his liver.

What can I say about a tech superguru, fellow Floyd fan, a close friend for two decades?

The guru's guru. Like so many "tech experts", I would inevitably turn to Atul when I was up against a wall with a piece of tech.

He'd pull no punches with friend or foe, and never agree with what he didn't believe in.

In the late-1990s, when our tech monthly PCQuest seeded India's open-source wave and gave out the first Linux distributions on CDs, our official guru was Atul Chitnis. In the first year he sat in our labs with his virtual whip, making sure we Linux greenhorns didn't trip over ourselves. For years later, he was there as guide and critic.

For decades, he was unofficial guru for us at PCQuest. He was the last resort when we were stuck with something - whether setting up an apache server, or an enterprise network, or Windows 8 on MacOS.

Readers remember his 1990s COMversations column in PCQuest to this day - his plainspeak, always leading tech change, always scathing about the status quo. His motto is still on his blog: "You're never remembered for doing what is expected of you."

He was the guy I'd turn to when I, a tech expert, didn't have a clue about some piece of tech. Or when I was really stuck with setting up something like Windows on my Mac, or a Linux apache server, or an enterprise network.

Many new products or tech areas I would take up were led by Atul. Including, years ago, setting up my blogs and a range of alumni websites and mail groups. Till today, my blogs are hosted on his server (and they've all gone down, as if in sympathy, as the world tries to reach his blog). Many of my tech decisions, whether moving to the iPad or from Windows to a MacBook Air, would happen after phone calls or messenger chats with Atul.

Atul suffered no fools. He had zero tolerance for mediocrity. On panels and juries - such as on the NDTV Gadget Guru Awards jury  - we often got a taste of his sharp tongue. His views and their expression were as fiery clear as his principles.

He would never win a popularity contest. He would simply never try - he just didn't give a damn. But at the end of the day, if you had a tech problem, this was the guy who had the answer.

The last time we met, exactly a year ago, was when my wife and I drove down a year ago to his labor of love, their lovely country house on the outskirts of Bangalore. I didn't have his address, just the GPS coordinates. He didn't know about his cancer yet. We spent much of a day with his lovely wife and daughter, his music collection, his dogs and cat.

Nothing excited him like a new piece of tech. One of his last acquisitions, his MacBook Air 11, a gift from friends and family, got him kick-started into writing again - in between chemo sessions. He was all set to get back to serious writing.

A month after diagnosis, Atul wrote on his blog, atulchitnis.net:  Cancer is a terrible disease, and it will take a lot to fight it - physically, emotionally, financially - but it is a battle that I am going to fight - and fight to win.

That he didn't, is our loss. It's the Indian tech media and user community's loss. For me, it's a void that no one else can fill.

Shine on, you crazy diamond.