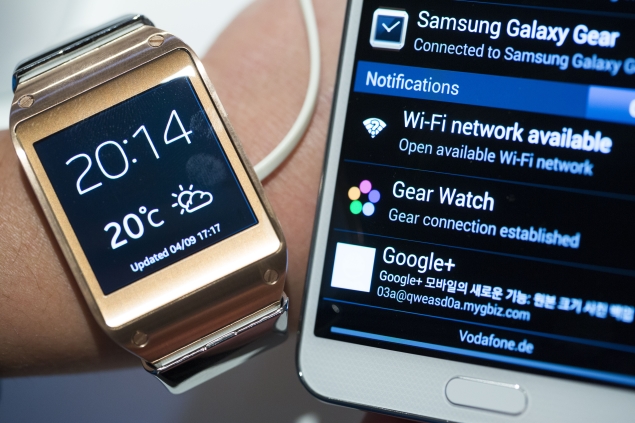 Nearly 70 years after Dick Tracy began wearing a two-way wrist radio in the funny pages, the technology that once seemed impossibly futuristic will be widely available by Christmas.

Samsung on Wednesday introduced a digital watch for the holiday season that will let users check messages with a glance at their wrists and have conversations secret agent-style.

So-called smartwatches have been around for several years. But so far, they have failed to attract much consumer interest. That may change with the Samsung Galaxy Gear, which offers the company a chance to pull off the same as feat Apple did with the iPad - popularize a type of device that has lingered mostly unnoticed on store shelves.

The Gear must be linked wirelessly with a smartphone to perform its full range of functions. It acts as an extension to the phone by discreetly alerting users to incoming messages and calls on its screen, which measures 1.63 inches diagonally.

"With Gear, you're able to make calls and receive calls without ever taking your phone out of your pocket," Pranav Mistry, a member of Samsung's design team, told reporters at the launch in Berlin ahead of the annual IFA consumer electronics show here.

Sony and Qualcomm also introduced smartwatches Wednesday. Apple is expected to release its own smartwatch, though it's not clear yet when. The release of separate products from so many manufacturers could stir interest in smartwatches in general. Meanwhile, Google is working on Google Glass - a device designed to work like a smartphone and worn like a pair of glasses.

With smartphones and tablets now ubiquitous, electronics companies are trying to create a new category of products that put advanced computing technology into everyday objects such as wristwatches and glasses. Research firm Gartner projects that wearable smart electronics will be a $10 billion industry by 2016.

But Ramon Llamas, an analyst at research firm IDC, said many things have to go right for smartwatches to succeed. Llamas said the devices need to offer a range of useful applications that justify carrying around - and charging - another digital device.

"It can't just be notifications of how many incoming messages you have," he said. "Health applications seem to be the low-hanging fruit."

For starters, the Gear will work with sporting and fitness apps such as RunKeeper, which tracks runs and other workouts.

Gartner analyst Carolina Milanesi believes it ought to do more, such as monitor a user's pulse and other health information. Other sensors, she said, could also authenticate a user's identity when making payments or detect locations so users could share their whereabouts with their friends.

"The watch is smart, but not as smart as it could be," Milanesi said. "It doesn't look like Samsung pushed the envelope as much as I hope Apple will. Right now, it looks like (Gear) will just provide you with an extra screen that is more convenient to look at than to have to take out a larger device. I don't think that's what consumers want."

The Gear goes on sale in the United States and Japan next month. The rest of the world will get it sooner, on Sept. 25, with prices starting at $299. That is about twice the price of currently available devices such as the Sony SmartWatch and the Pebble, which was funded through more than $10 million pledged by individuals on fundraising website Kickstarter. Another startup, also funded through Kickstarter, hopes to launch a stand-alone watch called Omate TrueSmart that comes with built-in cell connectivity.

Samsung Electronics Co.'s smartwatch uses Google's Android operating system, just like many of the phones and tablets made by the South Korean electronics company.

Mistry demonstrated the calling function on the Gear by holding it up to his ear and talking into a microphone hidden in the watch. The watch then relays the call to a smartphone over a built-in Bluetooth connection.

The strap, which comes in six colors, holds a basic camera that can be used to shoot photos and video. When linked to a smartphone or tablet, the Gear lets people check emails and Facebook updates from their wrists. Samsung said replies are possible through voice dictation. Voice commands can also be used for such tasks as setting alarms, creating calendar entries and checking the weather.

The Gear will be compatible initially with two Samsung products also unveiled Wednesday - the Galaxy Note 3, a smartphone with a giant 5.7-inch screen and a digital pen, and the Galaxy Tab 10.1, a tablet computer with a 10.1-inch screen comparable to Apple's full-sized iPad. But Samsung promised to update other Galaxy phones and tablets to work with the Gear in the future.

The number of apps that work with the Gear is also still limited. More than 70 apps are currently supported, including Facebook, Twitter and RunKeeper. That compares with the hundreds of thousands available for leading smartphones.

Unlike normal watches that can tick away for years on end, Samsung only promises a full day's use out of the Gear before it has to be charged.

Apple's plans for a smartwatch aren't known, but the company has been seeking a trademark for the iWatch name. The company is widely believed to be developing a watch that works on the same software as its iPhone and iPad, although it's unclear if it will be ready before the holidays. An announcement event next week is expected to be on new iPhones. Apple declined to comment Wednesday.

Meanwhile, Qualcomm didn't disclose a specific price or date for the Toq, beyond saying it will come out this year. Sony didn't provide many details about its SmartWatch 2 either. The focus of its announcement Wednesday was a new smartphone with a high-resolution camera.

Robert-Jan Broer, head of Germany-based market research firm Chronolytics, said many people who have stopped wearing watches because they are surrounded by time-telling devices might consider buying a smartwatch.

Brian Profitt, a technology expert and adjunct instructor of management at the University of Notre Dame's Mendoza College of Business, said the real question is whether the Samsung watch "will make the purchase of yet-another smart device worth it."

"It's great to have hands-free capabilities to take notes or snap a picture," Profitt said. "But it is $299 great? That's going to be the real test for the Galaxy Gear."