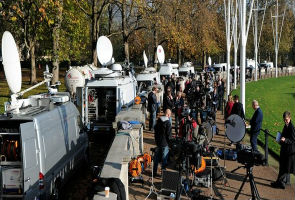 So, when Prince William weds Kate Middleton on April 29, the event will be commemorated by a series of media firsts as well.

These are, of course, only a few examples of the growing media frenzy surrounding the event.
For the world's media organizations -- including television giants like the BBC, cable channels like TLC and myriad digital outlets -- April 29 is a red letter day. And not only because the British government has declared a public holiday for the occasion.

How was it that a young couple's plan to tie the knot, a ritual as traditional as they come, has turned into an interactive, multimedia, multichannel, cross-platform, 24/7, user-generated, hyperlinked, search-engine-optimized, downloadable extravaganza?

Well, this is not just any young couple, and after a global economic crisis, disasters in Japan, the upheaval in the Middle East and other weighty news of recent weeks and months, media executives say the public is eager for a break.

"There's a lot of tough and very serious stuff happening in the world right now, and we're putting a lot of resources into covering them," said Mark Lukasiewicz, vice president of specials and digital media in the news division of NBC, the U.S. television network. "I think audiences are also going to welcome an event like this that's a little more about old-fashioned pomp and fun."

Not long after Prince William and Ms. Middleton announced their engagement last November, news outlets swung into action. Newspapers like The Washington Post and Web sites like The Huffington Post quickly created special online sections -- The Huffington Post declaring that "some news is so big it needs its own page."

While the digital media have played a big role in the build-up, television will come into its own on the wedding day. ITV, the biggest commercial broadcaster in Britain, for example, will start wedding-related programming at 6 a.m. and continue until at least 4 p.m., said Cristina Nicolotti Squires, executive producer of the channel's royal wedding program.

"The hope is that people will get up in the morning, turn on their TVs and sort of leave them on all day," Ms. Squires said.

Only a handful of journalists will actually be allowed into Westminster Abbey in London, where the ceremony will take place, said Victoria Ribbans, a spokeswoman for the abbey.

Television coverage of the wedding will be pooled, with the BBC manning most of the cameras inside the abbey. ITN, a news provider that works with ITV, and the news channel of British Sky Broadcasting, a pay-TV company, will film along the procession route.

"The feeling is they would like to keep it to a minimum," Ms. Ribbans said. "You could fill the abbey with the world's press many times over, but that isn't what it's about."

Broadcasters from all over the world are sending crews to London to supplement the pool coverage with the obligatory interviews of people in the cheering crowd who might once have sat in a Starbucks with someone who once lived next door to someone who once went to school with Ms. Middleton.

Despite the media hype over the wedding, live television viewership will probably fall well short of the audience for some of the most-watched television events in history, like the opening ceremony of the Beijing Olympics in 2008, which attracted an estimated one billion live viewers, said Kevin Alavy, who analyses television audiences at Initiative, a media buying agency.

One oft-quoted figure -- that the wedding of Prince Charles and Princess Diana in 1981 was watched by 750 million people worldwide -- is "vastly overstated" he said. That number, he explained, might include people who later saw clips on the news or elsewhere. A more realistic estimate for the wedding this month would be a continuous live television audience of 100 million, he added.

"When looking at major events of this kind, it's important not to take too Anglo centric an approach," Mr. Alavy said. "Will it be a big event in the U.K., the U.S. and Australia? Of course. But you can't just extrapolate that to the rest of the world. Is this going to be of interest to the average person in Russia, China or Brazil? Probably not."

Even in places where the audience is expected to be large, the commercial opportunities will be more limited than for, say, a soccer match with comparable viewership. In Britain, for example, advertisements are banned on the BBC. And ITV plans to broadcast without ad breaks during the ceremony and some other parts of the day.

Still, some channels are optimistic about the potential business benefits. TLC, a U.S. cable network that is popular with women viewers, sees the wedding as a way to promote its recent international expansion. TLC, which is owned by Discovery Communications, plans live coverage in about 30 countries.

"This is not just a news event," said Luis Silberwasser, executive vice president of Discovery Networks International. "We see this as a brand-defining event for TLC."

For the royal family, criticized for its aloof response to the British public's display of grief over Diana's death, the wedding preparations have also been a branding exercise of sorts. While in the past the royals might have been happy to let the professional media do their thing, this time around they have set up their own, official Web site. The digital presence also includes royal wedding Facebook pages and Twitter feeds.

Most of the tweets seem to emanate from Clarence House, Prince Charles's office, and tend toward the uncontroversial: "I think they will be a perfect match," Prince William's younger brother, Prince Harry, or perhaps one of his handlers, opined in a recent contribution.

The royals have also been receptive to the likes of Universal Music Group, whose Decca record label plans to release the soundtrack of the wedding ceremony, on Apple's iTunes store and, later, on compact disc. It could be one of the rare opportunities for musicians in the choir of the Westminster Abby, the Chapel Royal Choir, the London Chamber Orchestra and the fanfare team of the Central Band of the Royal Air Force, which are all expected to perform in the ceremony, to top the pop charts. In return, Universal promised a donation to charity.

But even digital-savvy royals sometimes have to say enough is enough. That happened when they rejected a request from Sky to broadcast the wedding in 3-D. Sky had gone to great lengths to try to persuade the family of the merits of 3-D coverage, even staging and filming a mock wedding at a church near London.

Clarence House, which is handling the wedding arrangements, explained that it did not want to have to deal with the extra "footprint" that the 3-D cameras would have taken up in the abbey.

"I know you have all become increasingly enthusiastic about 3-D and I'm sorry that this will come as a disappointment," a spokesman wrote in a letter to Sky and other broadcasters, which was quoted in the British newspaper The Guardian. "I hope you feel the process we have gone through will be helpful for other live events and of course we do not rule out facilitating 3-D at some point in the future."

In other words, should Prince Harry, someday decide to marry, there might still room for him to be a digital media innovator, too.