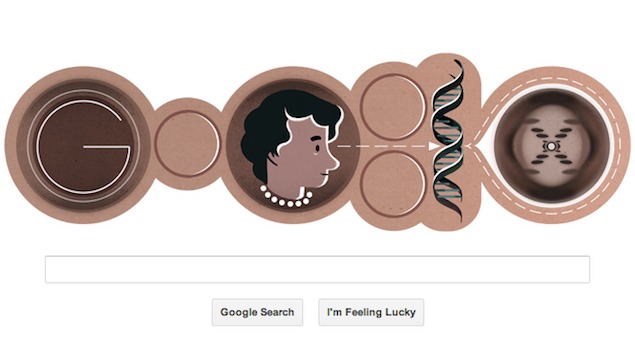 Rosalind Franklin's 93rd birthday on Thursday has been marked by a Google doodle. Franklin is best known for her work on the X-ray diffraction images of DNA which led to the discovery of the DNA double helix.

Franklin was born in Notting Hill, London on 25th July 1920. Her father was Ellis Arthur Franklin, a London merchant banker, and her mother was Muriel Frances Waley. Rosalind was the second child of the family of five children. From early childhood, Franklin showed exceptional scholastic abilities and it was no surprise when she went up to Newnham College, Cambridge, in 1938 and studied chemistry within the Natural Sciences Tripos.

After finishing her eduction, she met  the requirements of the National Service Act by working as an Assistant Research Officer at the British Coal Utilisation Research Association (BCURA).  Her work with BCURA became the basis of her thesis The physical chemistry of solid organic colloids with special reference to coal for which Cambridge University awarded her a Ph.D. in 1945.

However, Franklin is best known for her work on the X-ray diffraction images of DNA which led to the discovery of the DNA double helix. Her data was the one actually used by to formulate Crick and Watson's 1953 hypothesis regarding the structure of DNA. Unpublished drafts of her papers - written just as she was arranging to leave King's College London - show that Franklin had independently determined the overall B-form of the DNA helix and the location of the phosphate groups on the outside of the structure.

Franklin's images of X-ray diffraction confirming the helical structure of DNA were shared with Watson without her approval or knowledge. However, her work was published third, in the series of three DNA Nature articles, led by the paper of Watson and Crick which only hinted at her contribution to their hypothesis.

After her work on DNA, Franklin led pioneering work on the tobacco mosaic virus and the polio virus. She died in 1958 at the age of 37 of ovarian cancer.