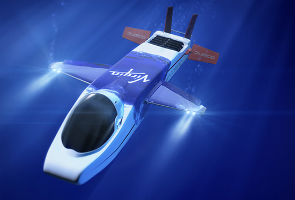 Highlights
We all know Richard Branson as the maverick founder of the Virgin group of companies. After his Star Trekish project Virgin Galactic, in which the prototype shuttle was named after the ship in honour of the iconic television show, Branson is turning his attention to the deeps.

The ocean is his next frontier and he aims to emulate the feats of Jacques Piccard and Don Walsh back in the 1960s. They touched down their bathyscaphe at the bottom of the deepest place on Earth, the Mariana Trench in the Pacific Ocean, 11 kilometres under the sea.

Branson and team will soon be attempting the same in five different attempts across the world in the next 24 months, trying to break the 36000 feet barrier. The first such dive will be in the Mariana Trench. Chris Welsh, the lone pilot of the ship, will dive to 11 kilometres under the sea and "fly" along the bottom for 10 kilometres.

This dive will be followed by a dive by Sir Richard Branson, who will take the 18-foot long Deep Flight Challenger to the deepest point in the Atlantic Ocean at over 8 kilometres. The ambitious two-year plan will be called Virgin Oceanic.

The idea behind the Virgin Oceanic project is similar to the Virgin Galactic project where Branson hopes to make space travel available to the common man.

VSS Enterprise, the prototype vessel of the Virgin Galactic program, is scheduled to take its first flight this year and could go commercial by 2012. There is no news on the commercialisation of the Virgin Oceanic project.

In the mean time enjoy the video preview:
Comments