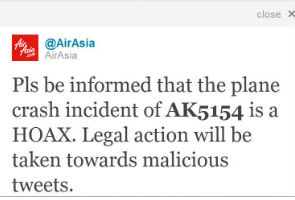 The messages claimed that the flight had crashed at the Kuching airport in Sarawak state or at the Kuala Lumpur International Airport in Malaysia. After the messages were brought to the notice of the airline, it immediately issued a statement advising the public to disregard malicious messages circulating on Twitter, Facebook or via chain SMS. AirAsia's twitter page said, "Pls be informed that the plane crash incident of AK5154 is a HOAX. Legal action will be taken towards malicious tweets."

The airline, headed by Tony Fernandes, has lodged a police complaint in this regard. It said efforts are on to trace those responsible for spreading the messages. The complaint also said that the rumours had caused panic among the public and disrupted AirAsia's operations.
Comments

How the iPad 2 lost weight
HTC launches the Desire Z