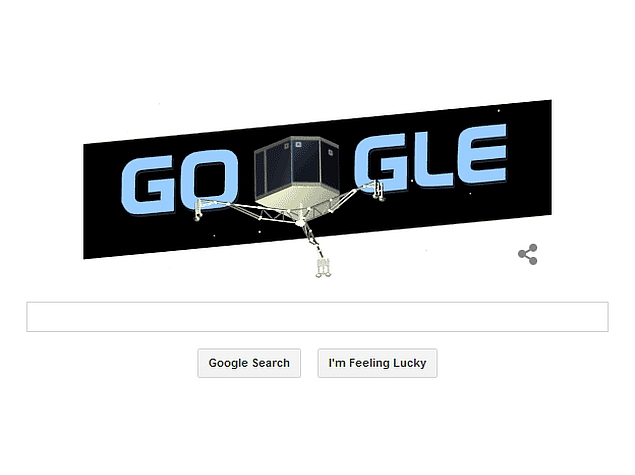 Philae lander probe finds itself at the centre of Thursday's Google doodle as the search engine is commemorating the first controlled touchdown on a comet nucleus, a feat achieved by the European Space Agency (ESA) with the Philae lander probe.

The Philae lander probe landed on 67P/Churyumov-Gerasimenko on Wednesday, more than 10 years after departing Earth on the Rosetta spacecraft.

The Philae lander robotic probe's significance is due to more than the achievement of landing on a comet nucleus, and the journey of 6.5 billion kilometres. With the Philae lander, the ESA hopes to investigate the mysteries of the early days of the solar system and planet formation by investigating the chemical composition of the comet that is thought to have originated from the Kuiper belt.

True to its mission of deciphering the unknown, the Philae lander is named after the Philae Island on the Nile in Egypt, a geographical body that is significant for being the location of the Philae obelisk, which along with the Rosetta stone, was used as a primer for deciphering the Egyptian hieroglyphics, finally achieved in the 1820s.

According to the ESA, the scientific goal of the Philae lander mission is to study the "elemental, isotopic, molecular and mineralogical composition of the cometary material, the characterization of physical properties of the surface and subsurface material, the large-scale structure and the magnetic and plasma environment of the nucleus."

Notably, the Philae lander probe is not the first human spacecraft to probe a comet's nucleus - that honour goes to Nasa's Deep Impact probe that 'impacted' comet Tempel 1 in July 2014- but it is the first to achieve a controlled touchdown on a comet nucleus. The Philae lander landed on 67P/Churyumov-Gerasimenko, also known as Churry, at 4:03pm GMT (9:33pm IST) on Wednesday.

The 100kg and fridge-sized Philae lander probe experienced some difficulties with deployment of the harpoon mechanism it was designed to use to anchor itself to the surface of the comet nucleus. ESA flight directors say they are considering options to ensure the lander does not drift back into space, and Stefan Ulamec, Philae lander manager at the DLR German Aerospace Center, added, "Hopefully we are sitting there on the surface ... and can continue our science sequence."

Thursday's animated doodle features the Philae lander probe in place of the second 'O' in Google, falling through a star field. The landing of the probe however is not shown. The Philae lander doodle is visible across the world, as per Google's doodle archive page.

The best Google doodles of 2014
Comments