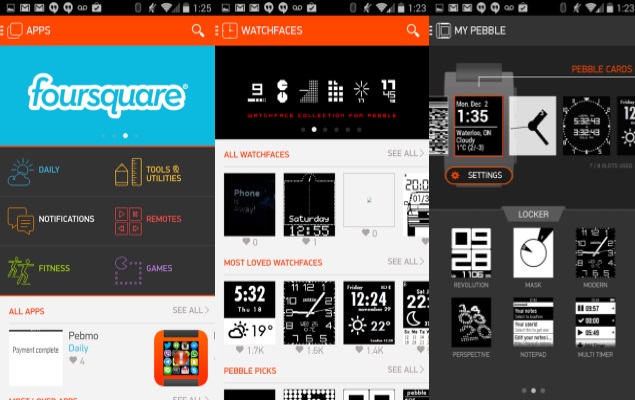 The Pebble 'appstore' for smartwatches went live for iOS users in February, and the company has now released its Android appstore with the updated version of its Android app.

Pebble announced the availability of the updated Pebble app for Android (v2.0), featuring the Pebble appstore or 'watchapp directory', for download from the Google Play store.

Notably, the Android version of the Pebble 'appstore' was in beta testing mode in February at the iOS counterpart's launch, and at the time, was available only to a limited number of Pebble users and developers.

The official blog post said, "Special thanks to the Pebble users and developers who tested our Android beta builds: your help and feedback was invaluable. So dive in, because it's time! Download Pebble for Android 2.0 from Google Play and unlock a whole new universe of apps and watchfaces waiting for you in the Pebble appstore."

While announcing the Pebble appstore for iOS in February, the company had revealed that an app will be rolled out for Android users, "very, very soon."

The company also announced three new partners for the Pebble appstore, namely eBay, Evernote, and Time Warner Cable. The new partners will join the line-up of partners including Mercedes-Benz, Yelp, and Foursquare.

Some of the new features in the Pebble for Android 2.0 include a revamped and enhanced UI design; Pebble watchapp directory and Watchapp locker.

The blog post notes, "This release supports a single Pebble watch. We are aware that some users may have multiple Pebble smart watches, and will add support in a future release."

It's worth mentioning that the Pebble smartphone app featuring the Pebble appstore is now available for download from the iTunes Store and the Google Play store for free.

In January, Pebble launched an updated device called Pebble Steel. The new watch is slimmer than the original and is made of metal and glass, rather than plastic.