On Apple's campus, shock and sadness 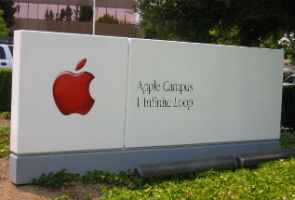 Highlights
While the world publicly mourned the death of Steve Jobs on Thursday, Apple employees did so more quietly, as befits a company that prizes secrecy. Some employees said the mood at the company's headquarters in Cupertino, Calif., was a combination of sadness and business as usual.

"We knew it was coming; it was just a matter of when, not if," said one employee who declined to be named, citing company policy. "I'm just really happy he was surrounded by his family when it happened."

One former engineer who very recently left Apple to start her own company said she and the current employees she spoke with were shaken up by Mr. Jobs's death, even though it seemed inevitable.

"Everyone is surprised but saying we shouldn't have been surprised," said the former employee, who requested anonymity to protect her relationship with the company and her friends there. Mr. Jobs "wouldn't have resigned if he was just a little ill or just a little tired. Being really sick -- that's the only thing that would make him get away from Apple."

The former employee said she and others also were experiencing a feeling of gratitude. "People are saying they are so happy to have crossed paths with him. They're also saying, 'This is a new beginning. It's somebody else's time to fly.'"

The engineer said there had been a lot of conversation about whether the company would falter or see a drop in creativity. She said the consensus among her contacts was that the culture would remain intact so long as the company retained the talent and creativity that surrounded Mr. Jobs, notably top lieutenants like Jonathan Ive, the company's design guru.

Former Apple employees said they heard from friends at the company that the news of Mr. Jobs's death had spread internally via social media and news sites. There was word that the company was planning some kind of celebration of Mr. Jobs for employees, but there were few details.
Comments