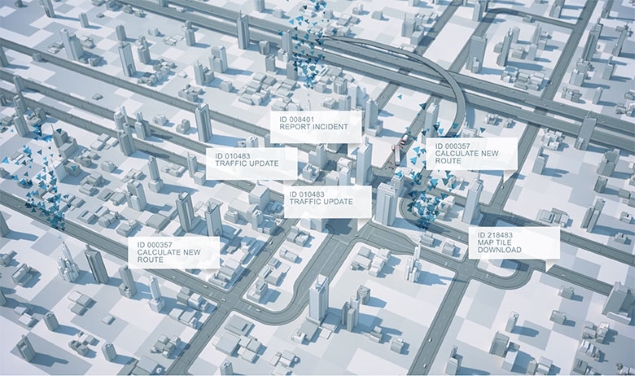 Here maps, the mapping and location software owned by Nokia, has been selected by Finnish transport authorities to lead a pilot project that will enable vehicles to communicate safety hazards to others on the road, thereby giving a massive boost to road safety in Finland. The pilot project, called Coop, is due to start in 2016. It will assess the capability of current and emerging mobile network and location technologies in enhancing and supporting the communication of key road safety information, such as black ice, an animal on the road, sudden traffic build-up, or an accident.

Initially, drivers will voluntarily share information on hazards and road conditions using smartphones. In the long run, the system is also intended to support cloud communication of data generated by a vehicle's onboard sensors and the surrounding road infrastructure to other vehicles and smart devices on the road, without the intervention of the driver.

Here has been given the task of implementing the project by the Finnish Transport Agency (FTA) and Trafi, the Finnish Transport Safety Agency. It will work together with traffic information management service company Infotripla in the implementation phase. The project will be the first to put into operation a road hazard warning messaging system as described in the Intelligent Transportation Systems (ITS) Directive set out by the EU.

George Filley, the head of Here's Digital Transportation Infrastructure program, said: "With this project, we will explore how technology within our reach today could make driving safer as cars get connected. There will be enormous amounts of data generated by a car's onboard sensors that can be collected, analysed and shared with others on the road. An important piece of the puzzle is to figure out how to provide relevant, low-latency information to the right people at the right time, and that is a problem we believe we can solve."

Here is currently owned and operated by Nokia, and was not a part of the properties sold to Microsoft by Nokia in the deal that began in September 2013. The company was known as Navteq until it was acquired by Nokia in 2008, and has gone through various rebranding exercises until it was named Here in 2012. The company recently added several new regions to its list of countries where it offers live traffic services, taking the total countries in the list to 50.