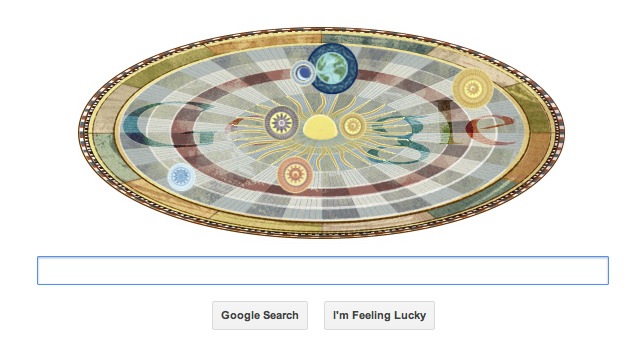 Nicolaus Copernicus, mathematician and astronomer, is the subject of Tuesday's animated Google doodle. Copernicus's work helped popularise the idea that Earth revolves around the Sun, instead of the other way round, as was commonly believed at the time.

Nicolaus Copernicus was born on 19 February 1473 in the city of Thorn, in the province of Royal Prussia, in the Crown of the Kingdom of Poland. Copernicus completed his matriculation in 1491-92 Copernicus and began his studies at the Department of Arts during the heyday of the Krakow astronomical-mathematical school, which laid the foundations for his subsequent mathematical achievements. Copernicus became a pupil of the famous Albert Brudzewski, who was the first to state that the Moon moves in an ellipse and always shows its same side to the Earth, and was as established name in astronomy during the time.

Nicolaus Copernicus did not graduate from the college, and later enrolled at a university in Bolgona, Italy. He stayed in Italy until 1503, at which point he returned to Warmia, to live with his uncle, who enjoyed the title Prince-Bishopric of Warmia. Copernicus was his uncle's secretary and physician and resided in the Bishop's castle at Lidzbark (Heilsberg). This is where he began work on his heliocentric theory.

Heliocentricism is the astronomical model in which the Earth and planets revolve around a relatively stationary Sun at the centre of the Solar System. Though Heliocentricism has now been proven and is widely accepted, it wasn't the case during Copernicus's time, when many, including most religious institutions and leaders, believed that the Earth was at the centre of the Universe. This belief has been termed Geocentrism.

Copernicus published the first draft of his heliocentric theories some time before 1514. This was shared with a small group of friends under the title "Commentariolus" ("Little Commentary"). He spent the next several years improving upon this theory via observing astronomical bodies and mathematical calculations. By 1532 Copernicus had all but completed his work and had consolidated his observations in a manuscript titled De revolutionibus orbium coelestium. However, he refused to have this published and shared beyond his inner circle as he did not want to risk the scorn "to which he would expose himself on account of the novelty and incomprehensibility of his theses."

In 1539, Georg Joachim Rheticus, a mathematician, came to live with Nicolaus Copernicus and learn from him. Rheticus stayed with him for two years and published  Narratio prima (First Account), outlining the essence of Copernicus' theory. The book was very well received. After this, Rheticus convinced Copernicus to have De revolutionibus published. However, legend has it, that Copernicus died the very day the first printed copy of De revolutionibus was placed in his hands. He is said to have awoken from a stroke-induced coma, looked at his book, and then died peacefully.

The Google doodle depicts the known planets of the time - Sun, Mercury, Venus, Earth, Mars, Mars, Jupiter and Saturn - revolving around the Sun, while the Moon revolves around the Earth. This is solar system as described in De revolutionibus.