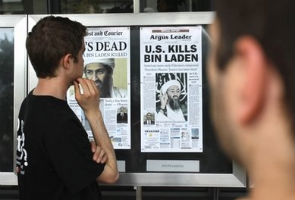 Highlights
When big news breaks, newspapers are in demand despite the immediacy of online news.

Newspaper across the country including The New York Times, The Washington Post and The News & Advance in Lynchburg, Va., printed extra copies in anticipation of higher demand Monday, when headlines heralded the death of Osama bin Laden.

Some newspapers stopped their presses to update their front pages with late Sunday's developments. The Washington Examiner, a free daily newspaper, ran a special edition Monday afternoon under the headline, "We Got Him!"

The website for the Newseum, a museum in Washington devoted to journalism, was inaccessible for many visitors Monday as thousands of people flocked to it to see how newspapers around the world handled coverage of the terrorist leader's death. The website posts digital replicas of front pages of hundreds of newspapers every day.

Paul Sparrow, senior vice president of broadcasting at the Newseum, said the museum often sees demand for newspapers' front pages spike when there are major stories in sports, entertainment or politics. Some of the biggest news events recently were the 2008 presidential elections and the New Orleans Saints' Super Bowl victory in 2009.

The site was processing more than 2,800 requests per second when it became overloaded, he said. Traffic started to peak at 3 a.m. Eastern time when Europeans woke to the news. It grew again at about 6 a.m. Newseum even became one of the 10 most-talked about topics on Twitter for a while.

Sparrow said Monday would likely be one of the busiest days, if not the busiest, for Newseum.org.

Although websites allow people to get up-to-the-minute news, readers turn to newspapers because they offer a snapshot in time, Sparrow said.

"It reflects an emotional moment in time versus an ongoing story that's constantly changing," he said.

Stephen G. Smith, editor of The Washington Examiner, said readers like to relive major events, and newspapers offer a chance to stop and digest news, rather than chase the latest developments.

Several newspapers promoted Monday's editions as keepsakes, just as many did the day after President Barack Obama's election and inauguration. Some newspapers, such as the Chicago Tribune, plan to make Monday's edition available for sale on Tuesday for people who missed it.

A newsstand at the National Press Building in Washington sold out nearly every newspaper with the bin Laden story by noon Monday. The Wall Street Journal and the New York Post were sold out on some newsstands, according to those newspapers.

The New York Times doubled or tripled the number of newsstand copies it printed for several markets, including New York, Washington, Boston and San Francisco. The Washington Post said it printed an additional 70,000 copies, which is about double its normal print run, excluding home subscribers. USA Today added roughly 200,000.

The Los Angeles Times printed 100,000 extra copies and kept printing plates in place "if we need to run more," said spokeswoman Nancy Sullivan. The News & Advance in Lynchburg added about 2,000 copies to its daily run of 28,000.

The newspapers did not say how many were actually sold Monday.

Newspaper websites were also seeing increased traffic. Visitors to The New York Times' website who were not already logged in could not access articles for about 30 minutes, as the site coped with an unprecedented surge in volume.

At the Newseum on Washington's Pennsylvania Avenue, a newspaper from Pakistan joined the daily displays of newspapers from every state and Canada. Many visitors pulled out their cell phones to take pictures of the screaming headlines, especially the New York Post's: "Got Him: Vengeance at last! US nails the bastard."

"It's exactly how New York feels," said Jamie Jablonowski, 24, of East Brunswick, N.J., who was visiting a friend in Washington. The two had joined hundreds of others at the White House when news broke Sunday night.

She and her friend, Rachel Nomberg, 24, remember 9/11 from their junior high years. It's the first huge moment of history they can remember.

"People talk about newspapers going out of style and the Internet taking over, but I do think it's really cool to have something tangible," Nomberg said.

The Honolulu Star-Advertiser stood out for having one of the biggest pictures. Bin Laden's image filled nearly the entire page with the big headline, "Dead."

Some newspapers were noteworthy for not having the bin Laden news at all, with news apparently coming too late for their deadlines. Some including The New York Times and USA Today had to redo their front pages after their press runs had already begun. Others delayed their printing; The Washington Post said its final edition wasn't finished until 2 a.m., hours past its normal deadline.

Time magazine plans to publish a special edition Thursday to mark the occasion. The cover image of the new, 68-page issue will be the fourth in the magazine's history to feature a red "X" over a historical figure's face. The first time was on May 7, 1945, following the death of Adolf Hitler.

The Newseum will save Monday's front pages and post them in the museum's permanent 9/11 exhibit, which also features the broadcast tower that once stood atop the World Trade Center.

The Newseum also plans to set up a video booth over Memorial Day weekend for visitors to record their remembrances. Curators will create a special exhibit for the 10th anniversary of the Sept. 11 attacks this year.

Tyson Tuttle, 43, of Austin, Texas, was visiting Washington with his wife for their daughter's school trip. They plan to save copies of several newspapers and hope to snag a copy of the New York Post.

"In 2001, when you woke up and you saw the buildings on fire and everything we've been through from then until now, it's a good end point," he said. "I hope that we can move on and start solving some of our other problems. But it's a good day to celebrate."
Comments