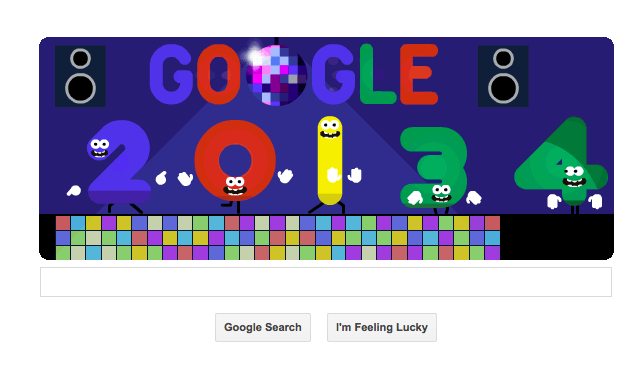 New Year's Eve 2013 has inspired the last doodle of the year. Upon hovering the mouse over this animated doodle, the text Happy New Year! is displayed.

Tuesday's doodle features numbers 2, 0, 1, and 3 on the dance floor with the number 4 waiting along the sides, waiting for its turn to replace 3. The dance floor is made up of little squares that are changing colours, designed to represent the floor lights in various colours. The word Google is seen sandwiched between two speakers, with the second O replaced by a disco ball.

Also present on the Google home page is the text "What did the world search for this year? Remember the moments of 2013", with a link to the Google Zeitgeist 2013. This has of course been seen for a while, and is not a new addition.

Though the latest Google doodle looks interactive, we tried various browsers and we couldn't get the doodle to do anything except show Google search results for New Year's Eve 2013. The first result is a Google search card that says, "Tuesday, December 31 New Year's Eve 2013", similar to what you get while searching for other important days like Diwali 2013 on Google India, or Memorial Day 2013 on the Google US homepage.

NDTV Gadgets would like to wish its readers a safe New Year's Eve 2013 and a Happy New Year.