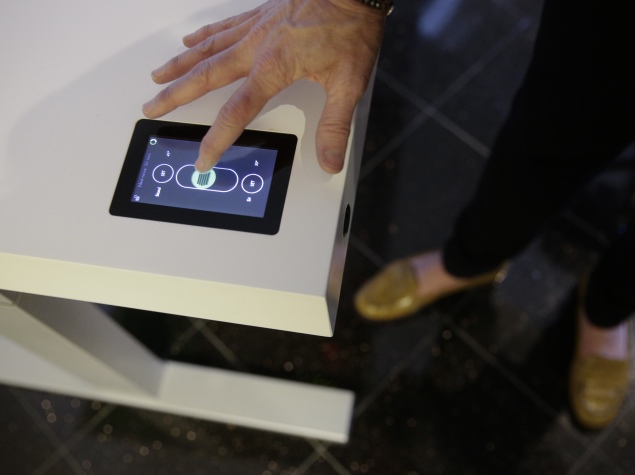 Sitting down all day is bad for you, or so doctors say. There's been a burst of interest in standing desks, but they're not that easy to use, and it's hard to motivate sitters to stand.

Stir, a company founded by a former Apple engineer, says it has the answer: a table that will nudge you to stand, with a gentle, one-inch rise and fall of its surface. If you take the suggestion, the table rises to standing height.

The table is controlled from a color touch screen. It looks as though someone has hammered an iPhone into the table's surface. To change between sitting and standing positions, you tap it twice. You can program it to make you stand, say, 35 percent of the time. A hidden heat sensor helps the desk determine whether you're there.

The screen also controls the table's Bluetooth and Wi-Fi connections. They don't do much right now, but the plan is for the table to connect to your smartphone to track your sitting and standing periods.

One day, it'll also connect fitness bands such as the Fitbit to help the table figure out when you should be sitting and standing. For instance, the FitBit could tell the desk that you've had a tough workout already that morning and let you sit a bit more than usual, Stir CEO JP Labrosse says.

Now, all we need is a TV couch that reminds people to stand.

Other goodies
The desk contains power and USB connections in recessed, lidded boxes, so you can charge your phone straight from the desk, then hide the cable under a lid.

Availability
You can order the Stir Kinetic desk now for $3,890. That's about three times the price of simple motorized adjustable-height desk. The company expects to start shipping the tables in February.

The pedigree
Labrosse was one of the engineers behind the first iPod. He then co-founded a company that made a system that moved solar cells to track the sun. His former boss at Apple, Tony Fadell, went on to create another surprising "smart" product: the Nest connected thermostat.