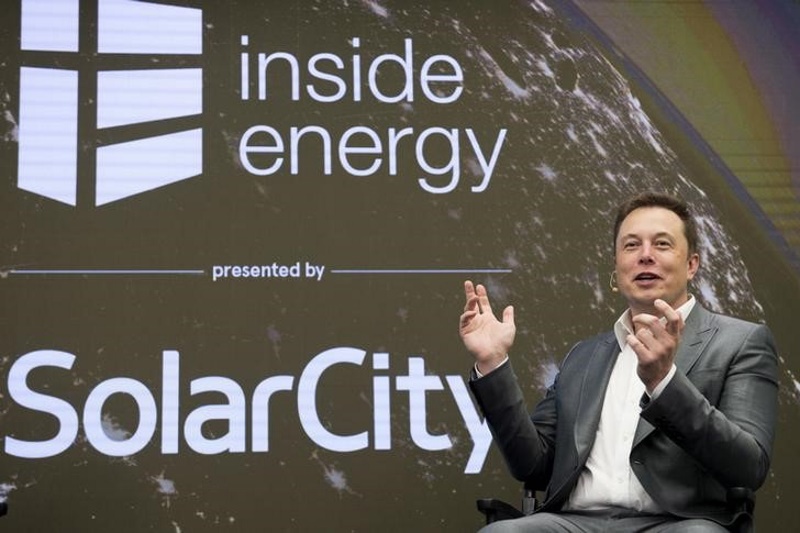 In a blog post titled "Master Plan, Part Deux," Musk sketched a vision of an integrated carbon-free energy enterprise offering a wider range of vehicles, and products and services beyond electric cars and batteries.

The newest elements of the strategy included plans to develop car and ride sharing programs as well as commercial vehicles - businesses where other companies already compete, and in some cases have ample head starts on Tesla.

The new vehicles range from a commercial truck called the Tesla Semi to a public transport bus, a "new kind of pickup truck" and a compact SUV. The vehicles will be unveiled next year alongside Tesla's existing fleet of electric cars.

Musk restated his argument that Tesla should acquire solar panel installer SolarCity Corp, where he is a major shareholder, and said he aims to make Tesla's Autopilot self-driving system 10 times safer than cars that humans drive manually.

The plan did not detail how the new projects would be financed at a time when Both Tesla and SolarCity are burning through cash.

Musk summarized the plan saying Tesla aimed to "create stunning solar roofs (for homes) with seamlessly integrated battery storage. Expand the electric vehicle product line to address all major segments. Develop a self-driving capability that is 10X safer than manual via massive fleet learning. Enable your car to make money for you when you aren't using it."

Musk said he envisions Tesla owners allowing others to use their vehicles through a smartphone application. He indicated there will be a "Tesla shared fleet," but did not offer details of how that fleet would be managed.

Rival automakers are pursuing some of these goals as well.

"In cities where demand exceeds the supply of customer-owned cars, Tesla will operate its own fleet, ensuring you can always hail a ride from us no matter where you are," he said. Such a service would put Tesla in competition with ride hailing services such as Uber or Lyft.

Musk said all future Tesla products will have fully self-driving capability, including trucks and buses.

He vigorously defended Tesla's decision to offer what he described as a "beta" system to allow partial autonomy in its vehicles, a system called Autopilot. Federal regulators are investigating Autopilot after a fatal accident involving a Tesla Model S operating with the system engaged.

"When used correctly, it (Autopilot) is already significantly safer than a person driving by themselves," he wrote.

Musk did not say when fully autonomous Teslas would be ready, but indicated it could require roughly five years of additional testing.

On June 21, Musk proposed Tesla buy SolarCity. He outlined a combined company that could provide consumers with the tools for a largely carbon-free lifestyle - electric cars recharged with electricity generated by SolarCity solar panel systems, or stored in the home using battery packs produced by Tesla's battery Gigafactory under construction near Reno, Nev.

Musk owns 22 per cent of SolarCity's shares, and has outlined plans to offer buyers of Tesla electric vehicles a solar power generation and battery storage system.

To fund projects Tesla in May sold about $1.7 billion (roughly Rs. 11,427 crores) in new shares. Much of that will be used to accelerate development of its new Model 3 car lineup and reach a production pace of 500,000 vehicles a year by 2018.