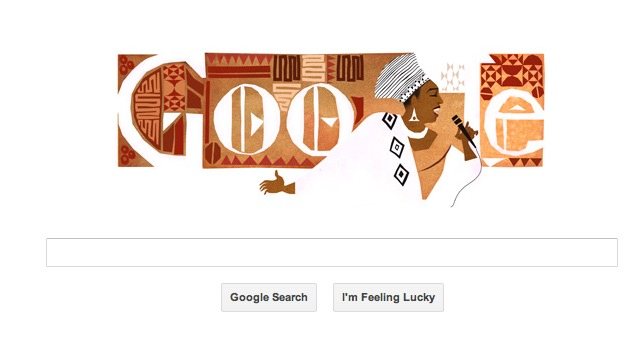 Miriam Makeba is the subject of Monday's Google doodle. Zenzile Miriam Makeba was born in Johannesburg, South Africa on 4 March 1932. Makeba made her name as a singer and actress and is probably best-known for her song "Pata Pata".

Miriam Makeba spent the first six months of her life in jail after her mother was sent to prison for selling illegal beer when she was just eighteen days old. Makeba's father died when she was six years old.

In 1956, she released the single "Pata Pata", which was played on all the radio stations and made her known all over. The song is considered by many to be Makeba's signature hit and the song has since been covered by many artists. Originally written and sung in the Xhosa language, the song's title means "touch touch" in English.

In the late 50s, Miriam Makeba travelled to Europe and US, and gained some popularity. However, when she tried to return to South Africa in 1960 for her mother's funeral, she discovered that her South African passport had been cancelled. This forced her to kickstart her US career, releasing a couple of albums along way, Miriam Makeba and The World of Miriam Makeba.

In 1963, she testified against apartheid in South Africa before the United Nations. Her country responded by revoking her South African citizenship and right to return to the country.Guinea, Belgium and Ghana came to her support issued her international passports, and she became, in effect, a citizen of the world. In her life, she held nine passports, and was granted honorary citizenship in ten countries.

In 1966, Makeba received the Grammy Award for Best Folk Recording together with Harry Belafonte for An Evening with Belafonte/ Makeba. She moved to Guinea in 1968 after her marriage to Stokely Carmichael caused controversy in the US. She lived there for the next 15 years.

Miriam Makeba was amongst the several popular artists that took part in the Nelson Mandela 70th birthday tribute festival on 11 June 1988. Mandela was eventually released in February 1990 and that paved way for Makeba's return to her country in June 1990. She continued her career in her homeland and elsewhere, dying on November 2008, age 76, after a heart-attack. Miriam Makeba left behind a legacy of activism for civil rights all across the globe.