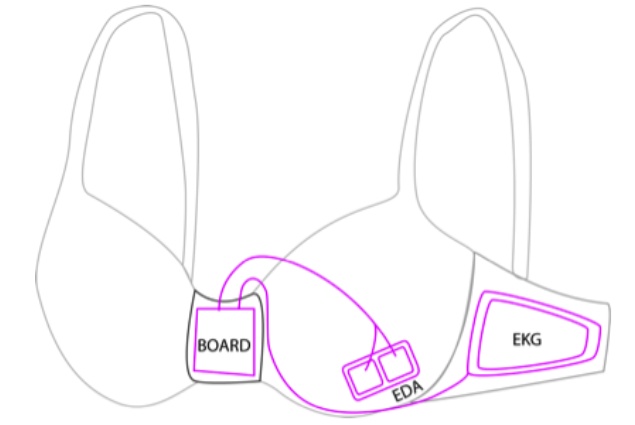 Researchers at Microsoft have designed a 'smart bra', which features removable sensors that monitor heart and skin activity, and infer whether the wearer is feeling stress. The ostensible purpose of the 'bra sensing system' is to help prevent stress-related overeating.

Designed by a team from Microsoft's visualisation and interaction research group, along with researchers at the University of Rochester and University of Southampton, the smart bra has been detailed in a paper titled 'Food and Mood: Just-In Time Support for Emotional Eating.'

According to the paper, the smart bra features a GRASP (Generic Remote Access Sensing  Platform) board that is powered by a Lithium-Ion battery, and can sample up to eight bio-signals.

Four sensors have been bundled on the bra, and linked to the GRASP board - an electrocardiogram (EKG) sensor, an electrodermal activity sensor (EDA) for measuring skin conductance, and two movement sensors, a 3-axis accelerometer and 2-axis gyroscope.

The GRASP board can transmit sensor stream data to a mobile phone application, EmoTree, using Bluetooth, data which can then be stored remotely into a Microsoft Azure Cloud.

According to the team, the design motivation for the bra sensing system was driven by a few key factors, including a form factor that would be comfortable when worn for long durations, and a single wearable device that could provide both EKG and EDA signals, thus one that was worn near the heart.

As is apparent by the design motivation, creating such a wearable device for men will be difficult, as their anatomical support requirements and fashion norms do not feature a skin-hugging garment worn in the region of the heart.

The technology of the prototype bra sensing system is also in early stages, as the GRASP boards had to be recharged every "three to four hours," according to Microsoft senior research designer Asta Roseway, quoted by the BBC. This made it very tedious for participants to wear it, remove it, charge it, and wear it again.

Another recent wearable computing technology prototype by a major electronics firm was the SmartWig from Sony. The patent for the SmartWig was spotted on the USPTO, and detailed three types of wigs - Presentation Wig, Navigation Wig, and a Sensing Wig - with different uses.
Comments