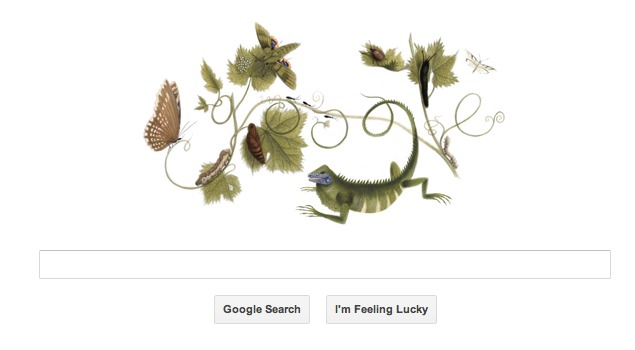 Maria Sibylla Merian's 366th birthday is being marked by a Google doodle. Merian is best known for her detailed observations and documentation of the metamorphosis of the butterfly and other contributions to the field of entomology.

Maria Sibylla Merian was born on 2 April 1647 in Frankfurt. Her father died three years after her birth, and in 1651 her mother married Jacob Marrel, a still life painter. Marrel encouraged Merian to draw and paint. At the age of thirteen she painted her first images of insects and plants from specimens she had captured.

Later, Merian was to document her early years in a book, saying, "In my youth, I spent my time investigating insects. At the beginning, I started with silk worms in my home town of Frankfurt. I realised that other caterpillars produced beautiful butterflies or moths, and that silk worms did the same. This led me to collect all the caterpillars I could find in order to see how they changed."

Merian published her first book, Neues Blumenbuch (New book of flowers) across three volumes, between 1675-80. In 1679, Merian published the first volume of her second book called Der Raupen wunderbare Verwandlung und sonderbare Blumennahrung - The Caterpillar's Marvellous Transformation and Strange Floral Food. The book contained various illustrations detailing the different stages of development of multiple species of butterflies, as well as the plants on which they fed.

This book very popular in certain sections of high society as a result of being published in the vernacular language, instead of Latin, the 'official' language of science at the time. This meant that the scientific community largely ignored her work. However, the work Merian did places her among one of the first naturalists to have observed insects directly. This approach gave her much more insight into their lives and was contrary to the way that most scientists worked at the time.