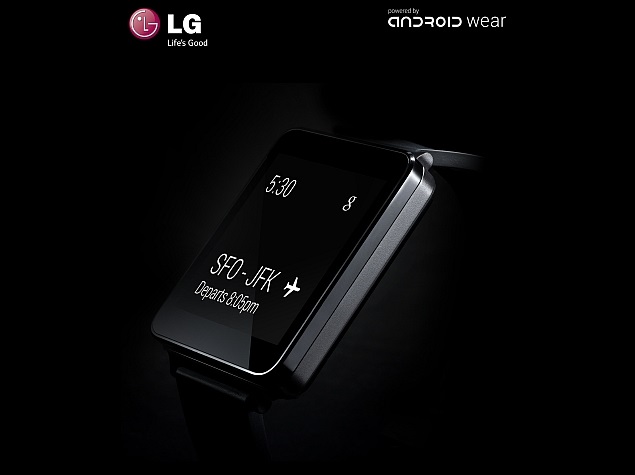 Google has finally unveiled its 'Android Wear' developer preview focussed entirely on smartwatches, and LG is all set to take the advantage of the platform, with a smartwatch due to be unveiled in the second quarter of 2014.

The Korean electronics giant has unveiled its plans to bring the Android OS to the user's wrist via its smartwatch, the LG G Watch. "LG Electronics (LG) is working together with Google on LG G Watch powered by Android Wear, which extends the Android platform to wearables," stated the official LG press release.

The LG G Watch will focus on the users' health and enable them to follow other exercise goals, let users to call for a taxi, send text messages, make restaurant reservations, cast movies on television screens and more.

The LG G Watch, seen in its teaser image above, sports an LCD touchscreen that's got a simple rectangular profile showing the time on the top-left corner, the Google icon on the top-right, and flight reservation timings at the bottom. LG will be announcing specifications for the smartwatch later.

The LG G Watch is claimed to complement a number of Android smartphones coming from different manufacturers and will act on user's voice-commands when they say 'Ok Google.'

"The opportunity to work with Google on LG G Watch was the perfect chance for LG to really pull out all stops in both design and engineering," stated Dr. Jong-seok Park, president and CEO of LG Electronics Mobile Communications. "With the LG G Watch, LG is continuing the milestones we've set in wearables following in the footsteps of the world's first 3G Touch Watch Phone in 2009 and the Prada Link in 2008. We're confident that a well-designed device has the potential to take the smart wearable market by storm."

Google however, besides LG, is also teaming-up with other firms for its Android Wear, out of which some key manufacturers are Asus, HTC, LG, Samsung and the Fossil Group.

Motorola is also seen making strides in this area as they too have officially unveiled their plans for a smartwatch, Moto 360, clubbed with Android Wear. Some of the chipmakers included in the team are Broadcom, Imagination, Intel, Mediatek and Qualcomm.