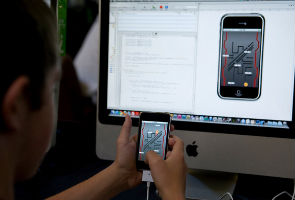 Highlights
Summer camps have long been part of the American experience for children and teenagers, and for the last 30 years or so, computers and technology have added to the equation.

For parents thinking of sending a child to technology camp this summer, early-bird registrations and discounts are ending, but there is still plenty of time to sign up.

When it comes to camps that specialize in computers, video games and technology, the hard part is to understand the lay of the land. Much has changed since Michael Zabinski, a professor at Fairfield University in Connecticut, founded the first such camp, the National Computer Camps, in the late 1970s, featuring the likes of RadioShack TRS-80 and Apple II microcomputers.

Yes, would-be Mark Zuckerbergs can still don headphones and learn to write source code in the summer months, but they can also do so much more with creative digital arts and high-end gear at their disposal. At today's tech camps, including National Computer, children design video games and Web pages, explore robotics, learn three-dimensional animation, create applications for mobile phones and tablet computers, shoot and edit films, and delve into graphic design.

This summer, Karen Katzenberger, 13, of Fall City, Wash., plans to take her love of drawing to a new level at DigiPen ProjectFUN with a three-dimensional animation workshop.

Last summer, at a programming academy offered by iD Tech Camps, Matthew Dierker, now 17, of Sugar Land, Tex., developed two mobile phone applications. One was designed to change the identity of a caller and the other allowed a user to "paint" on the screen. Matthew said Apple would have rejected his app, so he made it Web-based instead.

Over the last two summers, Joe Davidson, now 14, of Anchorage,Alaska, traveled to Stanford University to study filmmaking at the Digital Media Academy, and produced two documentary films, said his father, Art Davidson. His first film explored the war-torn region of Kashmir, which he visited with his father at 13, and last summer, he filmed the Rush Soccer club donating soccer uniforms to children in Africa.

Mr. Davidson said that as a parent, he found Joe's experience, as well as that of his older brother, Arthur, who latched onto making computergames at the academy, "very rewarding." It "lit a fire inside them," Mr. Davidson said.

How should parents research camps that could give their children similar experiences? A quick Google search provides a range of technology camp names. Sites like Allen's Guide and MySummerCamps.com help narrow searches geographically and by type.

Mimi Mansfield of Deerfield, Ill., the mother of four children, said she relied on the Internet to find the nearby Emagination Computer Camps. She and her husband first sent their oldest child, Max, 13, then Oliver, 10, and now Lily, 8.

"She went for one day last year because she wanted to do what her brothers were doing," Mrs. Mansfield said. "We didn't think she would like it. Now she is signed up to go this year."
What ends up being the right fit depends upon a child's interest, parents say. They also consider the location of the camp, the cost, its accreditation, the experience of instructors, whether it offers day activities or extended stays, what curriculum is offered and what other activities areincluded, if any.

Tuitions vary widely, from hundreds of dollars to thousands, with various discounts for registering early, for sending more than one child or for referrals. Most camps offer financial assistance, and some have scholarships.

Not every camp is elaborate or expensive. At George Washington University Department of Computer Science, for example, a one-week day camp started in 2008 was free, said Shmuel Rotenstreich, who developed it. The camp began charging $100 a week in 2009, and has since expanded to two weeks.

Because the industry is competitive, camps often try to distinguish themselves in certain areas. Since Emagination was founded in 1983, said Craig Whiting, executive director and owner, the camp has blended technology learning with traditional summer camp activities.

"Recreation isn't an afterthought," Mr. Whiting said. "It's a critical part of our program."
To accomplish that marriage of activity, he added, there must be "campy things to do" like tennis, drama, capture the flag and kickball. In that way, Mr. Whiting said, a camper gets "a more balanced experience and the opportunity to make friends."

Digital Media Academy relies on the expertise of its staff in building its technology program. Vince Matthews, director of communications, said the academy consisted of "first and foremost, technology educators." All the instructors, he added, are working professionals.

Digital Media Academy now has a presence on 10 university campuses, including Stanford, Harvard and the University of California, Los Angeles, and focuses on quality of instruction rather than amount, he added.

Other camps provide university settings as well. ID Tech Camps, or internalDrive, in its 13th season, offers weeklong, day and overnight summer tech programs for ages 7 to 17 at more than 60 universities. There are alsotwo-week immersive teenager-only academies in programming, game development and visual arts.

The organization is a longtime supporter of what are known as STEM programs, in science, technology, engineering and math, Ms. Safran said, as it encourages students to excel in those areas.

"What we're trying to do is to take a child's hobby and show how to turn it into a potential career," Ms. Safran said.

Nathaniel Katzenberger, Karen's older brother, is a graduate of the camps and is enrolling in the high school program, tuition-free, his mother, Claire, said, to enhance his knowledge of computer science.

"I'm pretty good at math," Nathaniel, 16, said, "and I definitely like computer programming." Still, he's not sure that is his career path, though his skills would be highly sought after. "The main thing is I like playing music. This is more like a side interest."
Comments