Kellogg's Bowl Bot: US College Campuses Get Robots to Dispense Cereal Mixes Into Their Bowls 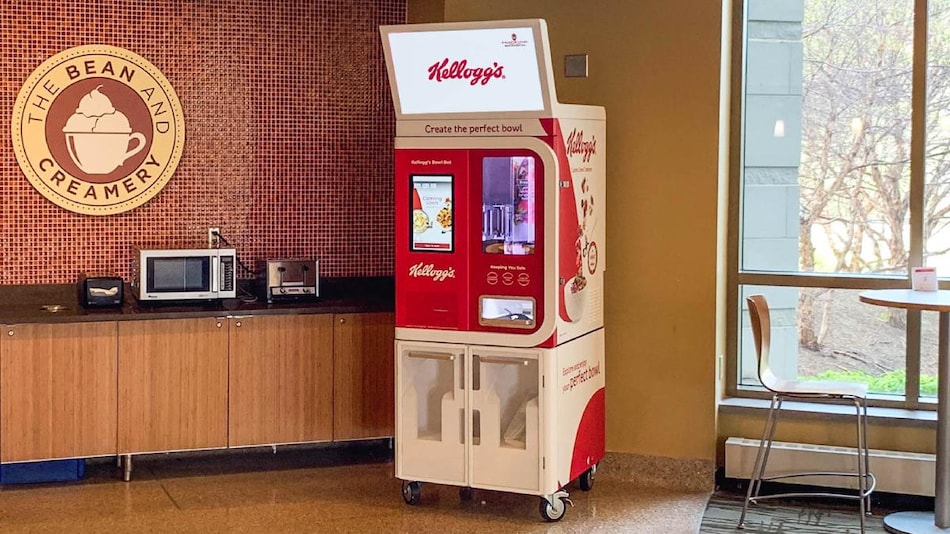 Photo Credit: Kellogg's Away From Home

Two US college campuses are getting a cereal-mixing robot that prepares a breakfast-ready bowl. These breakfast-dispensing robots, created as a joint pilot between Kellogg's and Chowbotics, have been rolled out at Florida State University and the University of Wisconsin-Madison. On the Kellogg's Bowl Bot, operated through a touchscreen interface or the Chowbotics app on a smartphone, a user can custom-create a breakfast bowl by blending the ingredients, including cereals, milk, fruits, and nuts of their choice.

There is no dearth of ingredients, either. For a healthy breakfast bowl, the machine offers more than 22 ingredients in total. And just in case you are not sure of what mix to go with, that's no reason to worry, for the robot comes with seven pre-programmed options.

The Kellogg's Bowl Bot will work alongside campus food service providers to increase the dining options for students. While a basic bowl of cereal costs $3 (roughly Rs. 220), the one mixed with a wider variety of ingredients may go up to $6.50 (roughly Rs. 470).

Chowbotics by DoorDash has previously created salad-making robots and the same technology has been put to good use to create Kellogg's Bowl Bot.

Penn Daniel, general manager of Chowbotics by DoorDash, said in a press release that the company was thrilled to partner with Kellogg's and the universities as they expanded their dining offerings. "The Kellogg's Bowl Bot provides students a convenient, quick way to customize the Kellogg's cereals they know and love for a fresh meal or snack anytime," Daniel said.

DoorDash, one of the largest food delivery company in the United States acquired Chowbotics, the salad-making robot startup in February this year. Chowbotics had introduced the salad-making robot back in 2018 and named it Sally the Salad Robot. The vending machine can be restocked every day with up to 21 ingredients and a customer can customise as needed.