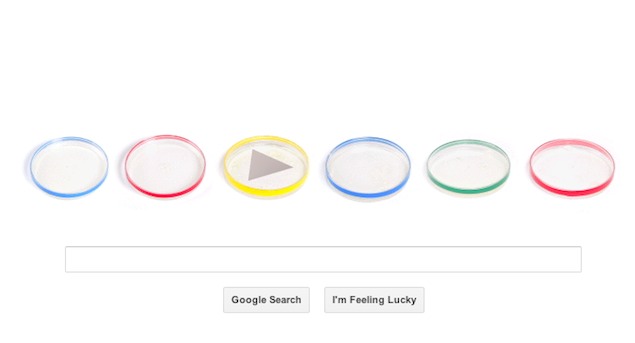 The interactive doodle features coloured petri dishes replacing the Google logo complete with the play button. After pressing the play button, a hand appears with a swab applying a solution on each of the dishes followed by the appearance of bacteria on each one of them. When you hover the mouse pointer on the dishes, they show the origin of the bacteria. The dishes show bacteria present in worn socks, door knob, keyboard, pet dog, plant, and a wet sponge complete with animated images.

Julius Richard Petri was born on May 31, 1853 in Barmen (German Confederation). He studied medicine at the Kaiser-Wilhelm-Academy for Military Physicians and got his medical degree in 1876. Petri further pursued his studies at the Charite Hospital in Berlin and served as a military physician till 1882, becoming a reservist. He died on December 20, 1921 in Zeitz.

Julius Richard Petri invented the petri dish in the year 1877 when he was working as an assistant to Robert Koch who is known as the founder of modern bacteriology.

A petri dish is essentially a shallow glass or plastic cylindrical container used for culturing cells by biologists. They are used everywhere from school labs for conducting experiments by students to research facilities where they're used by bacteriologists and other scientists. The invention paved the way for further research allowing scientists to identify microbes that cause diseases.