John McAfee back in US after being deported by Guatemala 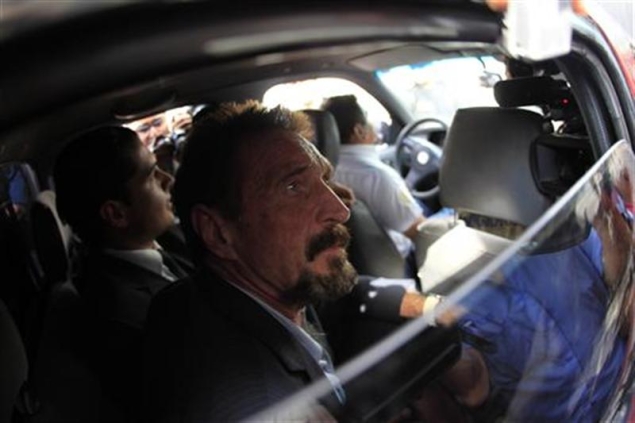 Computer software pioneer John McAfee, who is wanted for questioning in Belize over the murder of a fellow American, arrived in Miami on Wednesday evening after he was deported by Guatemala, according to fellow passengers on an American Airlines flight.

After landing, McAfee, 67, was escorted from the plane by airport security officers, passengers said. Shortly afterward, he tweeted, "I am in South Beach," referring to the popular tourist area on Miami Beach.

"Some people felt uncomfortable that he was on our flight. We all knew the story," said Maria Claridge, 36, a South Florida photographer who was on the Silicon Valley entrepreneur's flight to Miami.

McAfee, who was seated in the coach section and had a whole row to himself, was wearing a suit and was "very calm" during the flight, she added.

"He looked very tired, he looked like a man who hadn't slept in days. I'd say he even looked depressed," said another passenger, Roberto Gilbert, a Guatemalan who lives in Miami.

McAfee had been held for a week in Guatemala, where he surfaced after evading police in Belize for nearly a month following the killing of American Gregory Faull, his neighbor on the Caribbean island of Ambergris Caye.

Police in Belize want to quiz McAfee as a "person of interest" in Faull's death, although the technology guru's lawyers blocked an attempt by Guatemala to send him back there.

Authorities in Belize say he is not a prime suspect in the investigation. McAfee has denied any role in Faull's killing.

The goateed McAfee has led the world's media on a game of online hide-and-seek in Belize and Guatemala since he fled after Faull's death, peppering the Internet with pithy quotes and colorful revelations about his unpredictable life.

"I'm happy to be going home," McAfee, dressed in a black suit, told reporters shortly before his departure from Guatemala City airport on Wednesday afternoon. "I've been running through jungles and rivers and oceans and I think I need to rest for a while. And I've been in jail for seven days."

Guatemala's immigration authorities had been holding McAfee since he was arrested last Wednesday for illegally entering the country with his 20-year-old Belizean girlfriend.

The eccentric tech pioneer, who made his fortune from the anti-virus software bearing his name, has been chronicling life on the run in a blog, www.whoismcafee.com.

He said he had no immediate plans after reaching Florida.

"I'm just going to hang in Miami for a while. I like Miami," he told Reuters by telephone just before his plane left. "There is a great sushi place there and I really like sushi."

Belize still waiting
Residents of the Belizean island of Ambergris Caye, where McAfee has lived for about four years, said McAfee and Faull, 52, had quarreled at times, including over McAfee's unruly dogs.

McAfee says Belize authorities will kill him if he turns himself in for questioning. He has said he was being persecuted by Belize's ruling party for refusing to pay some $2 million in bribes.

"He will be just under the goodwill of the United States of America. He is still a person of interest, but a U.S. national has been killed and he has been somewhat implicated in that murder. People want him to answer some questions," he said.

Martinez noted that Belize's extradition treaty with the United States extended only to suspected criminals, a designation that did not currently apply to McAfee.

"Right now, we don't have enough information to change his status from person of interest to suspect," he said.

Residents and neighbors on Ambergris Caye said McAfee was unusual and at times unstable. He was seen to travel with armed bodyguards, sporting a pistol tucked into his belt.

The predicament of McAfee, a former Lockheed systems consultant, is a far cry from his heyday in the late 1980s, when he started McAfee Associates. McAfee has no relationship now with the company, which was sold to Intel Corp.

McAfee was previously charged in Belize with possession of illegal firearms, and police had raided his property on suspicions that he was running a lab to produce illegal synthetic narcotics. He said he had not taken drugs since 1983.

"I took drugs constantly, 24 hours of the day. I took them for years and years. I was the worst drug abuser on the planet," he told Reuters before his arrest in Guatemala. "Then I finally went to Alcoholics Anonymous, and that was the end of it."

Mobile penetration in India only 26 (not 74) percent, says GSMA
Apple outshines rivals amongst shoppers around the globe