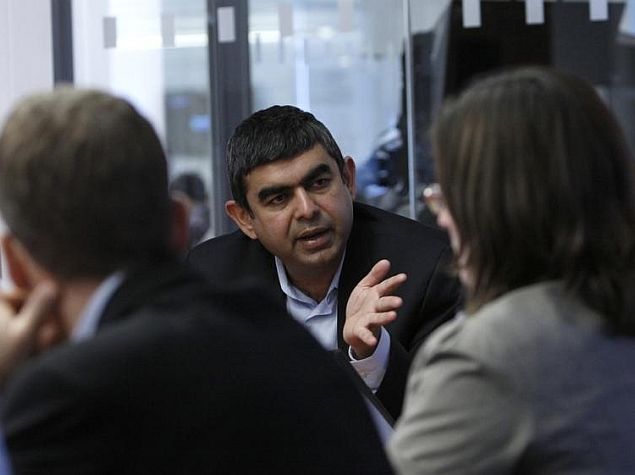 Infosys Ltd named former SAP AG top executive Vishal Sikka as Chief Executive Officer, the first time it has not chosen one of its founders for the role, as it looks to regain market share and stem a staff exodus.

India's second-largest IT services exporter said Executive Chairman N.R. Narayana Murthy would step down on Saturday, nearly a year after he was brought in from retirement to help the company better compete with rivals including Tata Consultancy Services and Wipro.

Murthy's tenure, during which he also brought in his son Rohan as an executive assistant, has been marred by high staff turnover and management uncertainty, factors that led to loss of market share for a company that was once a leader in India's $100-plus billion a year IT export business, and intensified investor pressure for a change of guard.

Sikka's biggest challenge as Infosys CEO will be to fill the leadership vacuum created by the exodus of senior executives, many of whom were responsible for key business sectors and winning clients, analysts said.

A former executive board member of German business software company SAP, Sikka will take over on August 1 from current CEO S.D. Shibulal, who along with Murthy, Executive Vice Chairman S. Gopalakrishnan and four others founded Infosys in 1981 by pooling together $250. Gopalakrishnan is also set to step down on Saturday.

Some investors welcomed the move.

"The good thing is that at least the uncertainty is all over and as an investor I can take a call on Infosys on a reasonably long term, not going from news to news," said R.K. Gupta, a fund manager with Taurus Asset Management, which owns Infosys shares.

At least 11 senior executives left the company since June last year when Murthy was brought back from retirement, triggering uncertainty at the top and dimming the company's status as the employer of choice for young IT workers, with staff leaving at an unprecedented pace.

Infosys said in a stock market filing on Thursday its board approved the dissolution of the chairman's office and Rohanwould also leave on Saturday, when the company would hold its annual shareholders meeting in Bangalore, where it is based.

Murthy, one of the pioneers of India's showpiece outsourcing services sector, will be designated as chairman emeritus from October 11 "in recognition of his contributions to the company", the statement said.

Infosys shares, the most widely held Indian stock, rose as much as 3.2 percent in early trade, but was trading down 0.8 percent at 11:13 a.m. with some dealers saying the new management would take time to turnaround the company.

Challenges
To turnaround Infosys, Sikka should bolster his senior management team and revive sales, analysts said, adding that he could also use some of the company's $5 billion cash balance towards acquisitions to boost growth.

The annualised rate of attrition at Infosys - the number of staff leaving or retiring - was a record 18.7 percent at end-March, 2.4 percentage points higher than a year earlier. That's close to a fifth of its workforce of more than 160,000.

"The top layer of executives are all but gone. With a new CEO coming in and from outside, there is a chance he'll hire external candidates, because he needs to have his team set," said Ankita Somani, research analyst at brokerage MSFL Research.

"That is a challenge for Sikka. I'd watch out for external candidates being hired, and maybe some exits."

Sikka, 47, is considered to be an innovator in the global software industry. A computer scientist by training, he was key in developing and marketing SAP's flagship product, Hana, which helps firms analyse large amounts of data quickly.

He joined SAP in 2002 and became a member of the executive board on February 7, 2010, leading products and innovation globally. He also led research initiatives at the company.

"Humbled to lead @Infosys an iconic pioneer in IT. Looking fwd to learn & work w/ infoscions & global clients on breakthrough innovation," Sikka said in a tweet after the announcement.

Sikka quit SAP in May amid rumours that he was passed over for the top job at the software company and was gearing up to take charge at Infosys. Before Sikka joined the executive board at SAP, he was the company's first chief technology officer.

Some analysts said Murthy's departure, along with that of the two other founders, would allow Sikka to make significant changes to revive the confidence of both clients and staff.

Murthy's return to Infosys last year had raised investor concerns that Infosys is overly reliant on its founders for leadership, a management culture criticised as conservative. All four of its CEOs were members of the founding group.

"Sikka is a very good thing for Infosys because he has a great reputation in the United States. That will help them get new business and also help improve in areas like digital and cloud," said a fund manager with a state-owned mutual fund who declined to be named as he was not authorised to speak to the media.

"The only thing is, sales are very important to Infosys right now, so it has to be seen if Sikka will be happy going on sales calls because that is important for Infosys."

Infosys' board also promoted its President U.B. Pravin Rao, widely seen as one of the internal candidates for the chief executive's role, as chief operating officer with effect from Saturday.