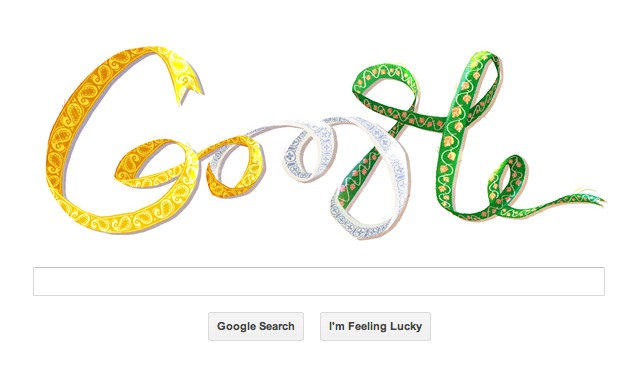 Independence Day India is the subject of Thursday's Google doodle, on the occasion of India's 67th Independence Day. The doodle depicts a tricolour ribbon, in the colours of the Indian flag - saffron, white and green.

15th August is celebrated as Independence Day across India to mark the day that the country declared its independence from the British rule, sixty-six years ago. On the eve of Indian independence in 1947, Pandit Jawaharlal Nehru delivered his famous Tryst with Destiny speech to the Indian Constituent Assembly in The Parliament. Here are its opening lines.

Long years ago we made a tryst with destiny, and now the time comes when we shall redeem our pledge, not wholly or in full measure, but very substantially. At the stroke of the midnight hour, when the world sleeps, India will awake to life and freedom. A moment comes, which comes but rarely in history, when we step out from the old to the new, when an age ends, and when the soul of a nation, long suppressed, finds utterance.

It is fitting that at this solemn moment we take the pledge of dedication to the service of India and her people and to the still larger cause of humanity.

At the dawn of history India started on her unending quest, and trackless centuries are filled with her striving and the grandeur of her success and her failures. Through good and ill fortune alike she has never lost sight of that quest or forgotten the ideals which gave her strength. We end today a period of ill fortune and India discovers herself again...

India was born as a sovereign nation on 15 August 1947, at the stroke of midnight, after nearly two centuries of rule by the British.

The East India Company start ruling India after it defeated the Nawab of Bengal and his French allies in the Battle of Plassey in 1757. The company ruled India for hundred years, before it was forced to hand over the reigns to the British Crown after the first revolt of Indian Independence in 1857.

The British Crown assumed direct control of India in 1858, and passed a series of stricter, repressive laws that broke the proverbial back of the local population. Unrest against the British Empire started rising, and the arrival of Gandhi from South Africa gave the movement a much needed focal point.

Gandhi became the symbol of the Independence movement, which was built upon the ideas of non-violence, civil disobedience and non-cooperation. The movement hit an upsurge during the late 1930s, and early 1940s, with India frustrated at being dragged into the World War II, and pressing for a full independence from the Empire, after earlier calls for partial self-rule.

Beaten down by the World War II, and the movement within India that was now at its peak, the British Government finally decided to end the British rule in India. A tragic side-effect of India's independence was the partition of India into two states, India and Pakistan, and the mass migration as well as communal violence that followed.