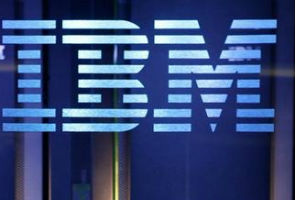 The selection of Virginia "Ginni" Rometty, announced Tuesday, is also a statement about the growing influence of women in the top tiers of business. Although women have made momentous strides, breaking through corporate America's "glass ceiling" over the past half century, a woman's ascendance into the chief executive position of a major corporation still holds significance.

Currently, only 16 Fortune 500 companies are led by a woman. Rometty and Heather Bresch, appointed Wednesday as CEO of drug maker Mylan Inc., would make that 18. Both take effect Jan. 1.

Even so, two of the world's biggest technology companies will have female leaders. Last month, Hewlett-Packard Co. named Meg Whitman, former eBay Inc. chief and candidate for California governor, as its CEO.

Their appointments are "setting a fabulous example" in the promotion of female executives, said Jean Bozman, an analyst with IDC who has followed IBM and HP closely for years.

"It does create an environment in which more of these high-ranking women executives can see that's within reach," Bozman said. "The more that happens, the more normal that will be. I think this might be a great sign that we've turned a corner. Certainly the Baby Boomers have wanted this for a long time."

Rometty, IBM's sales and marketing chief, is taking over from Sam Palmisano, who this year turned 60, the age at which IBM CEOs have traditionally stepped down.

Rometty, 54, will be among more than a dozen female CEOs in the Fortune 500. Another prominent female CEO of a technology company is Ursula Burns of Xerox Corp., who has held that title since 2009.

HP had another female CEO, Carly Fiorina, but her tenure ended in acrimony when she was forced out in 2005 over disappointing financials and the fallout from her hard-fought battle to buy Compaq Computer. Yahoo Inc. also ousted CEO Carol Bartz this year.

HP and IBM are bitter rivals that have followed somewhat inverted paths for years.

When IBM was near collapse two decades ago with the eroding dominance of its mainframes, HP thrived with the advent of personal computing and Silicon Valley's dot-com boom. Now the tables are turned - IBM is thriving while HP is hurting.

Two of technology's most powerful women will square off from sharply different positions.

Rometty will inherit a company in a sweet spot.

IBM, which is based in Armonk, N.Y., has proven resilient in the downturn because of hard decisions it made in the 1990s to focus on the high-margin areas of software and technology services, moving away from computer hardware. Rometty played a leading role in the transformation.

She was instrumental in the formation of IBM's business services division, including overseeing IBM's $3.5 billion purchase of PricewaterhouseCoopers' consulting business in 2002, which is a key element of a strategy that has made IBM a heavily copied company. Rometty joined IBM in 1981 as an engineer.

She is "more than a superb operational executive," Palmisano, who is keeping his job as chairman, said in a statement.

IBM's stock has more than doubled since the depth of the recession in 2008. Meanwhile, HP stock has fallen by about 50 percent.

A series of scandals has led to turmoil at the top of HP, with former CEO Mark Hurd resigning under pressure last year over ethical violations, and his successor, Leo Apotheker, being fired after less than a year on the job after fumbling an important restructuring.

One of Whitman's first moves was to accelerate a decision about whether HP will sell, spin off or keep its personal computer business, the largest in the world by sales. Investors seem undecided about what course they want HP to take. Some analysts worry that Apotheker did irreparable harm to the brand by announcing it was for sale before a buyer had been found, making it potentially hard to sell and hard to keep.

Analysts have generally said that both women are right for their roles - HP needs Whitman's star power to woo Wall Street while IBM needs a steady operator with broad experience like Rometty to continue IBM's predictable, steady growth.

IBM dates to June 16, 1911, when three companies that made scales, punch-clocks for work and other machines merged to form the Computing Tabulating Recording Co. The modern-day name followed in 1924.

It had a boys' club image but shed it long ago. Rometty's status as a front-runner for the CEO job was a poorly kept secret. Industry insiders have whispered about it for years, and Tuesday's announcement was only a mild surprise because of its timing.

IBM CEOs have traditionally stepped down at 60 years old, but Palmisano had tamped down talk of his retirement, insisting that he wanted to stay on as chief. In rare public comments, he said last year that he was "not going anywhere" and that there's no formal policy at IBM dictating when a CEO should retire.

Bobby Cameron, an analyst with Forrester Research who has worked with IBM in various roles over the years, said that in meetings with Rometty is "engaging" and inquisitive. Her interest in emerging technologies, not just the established sales leaders, is an important characteristic. Cameron thinks she's an ideal choice to continue Palmisano's work.

"I think she's smart. She asks questions; she doesn't just come in with an agenda, and she's interested in the leading edge, not just what's driving volume - all those things are important for a CEO to have," Cameron said.

"I think it will be more of the same, and I think that's a good thing," he said.