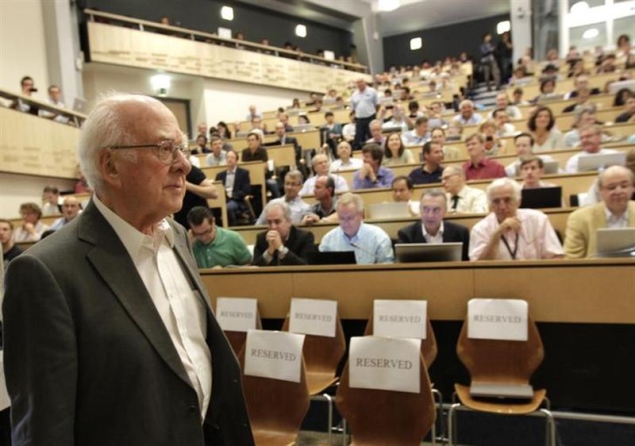 Scientists' hopes that last summer's triumphant trapping of the particle that shaped the post-Big Bang universe would quickly open the way into exotic new realms of physics like string theory and new dimensions have faded this past week.

Five days of presentations on the particle, the Higgs boson, at a scientific conference high in the Italian Alps point to it being the last missing piece in a 30-year-old cosmic blueprint and nothing more, physicists following the event say.

"The chances are getting slimmer and slimmer that we are going to see something else exciting anytime soon," said physicist Pauline Gagnon from CERN near Geneva in whose Large Hadron Collider (LHC) the long-sought particle was found.

And U.S. scientist Peter Woit said in his blog that the particle was looking "very much like a garden variety SM (Standard Model) Higgs", discouraging for researchers who were hoping for glimpses of breathtaking vistas beyond.

That conclusion, shared among analysts of vast volumes of data gathered in the LHC over the past three years, would push to well beyond 2015 any chance of sighting exotica like dark matter or super symmetric particles in the giant machine.

That is when the LHC, where particles are smashed together at light speed to create billions of mini-Big Bangs that are traced in vast detectors, resumes operation with its power doubled after a two-year shutdown from last month.

The Higgs - still not claimed as a scientific discovery because its exact nature has yet to be established - was postulated in the early 1960s as the element that gave mass to flying matter after the Big Bang 13,7 billion years ago.

Unexplained mysteries
It was incorporated tentatively into the Standard Model when that was compiled in the 1980s, and its discovery in the LHC effectively completed that blueprint. But there are mysteries of the universe, like gravity, that remain outside it.

Some physicists have been hoping that the particle as finally found would be something beyond a "Standard Model Higgs" - offering a passage onwards into a science fiction world of "New Physics" and a zoo of new particles.

They had been looking to the Italian gathering, called the Moriond Conference although it is held in the ski village of La Thuile, for reports bringing evidence of this.

Dark matter, the invisible stuff that makes up some 25 percent of the universe, and super symmetry, a theory that says all particles have unseen extra-heavy counterparts, were top of the target list after the finding of the Higgs.

Both are integral parts of the concept of "New Physics" that should take knowledge of how the universe works beyond that of the Standard Model blueprint.

There is little or no controversy about dark matter, whose existence is deduced from its gravitational influence on the visible galaxies, stars and planets which make up little more than four percent of the cosmos.

But super symmetry, dubbed SUSY by physicists, is controversial, championed by some physicists and dismissed as fantasy by others - like the string theory on how the universe is built, with which it is linked.

One of its proponents, Oliver Buchmueller of CERN's CMS research team, on Friday accepted that finding it would now take longer. "It seems we have to wait for 2015 and higher energy. That will be the showdown for Susy," he told Reuters.