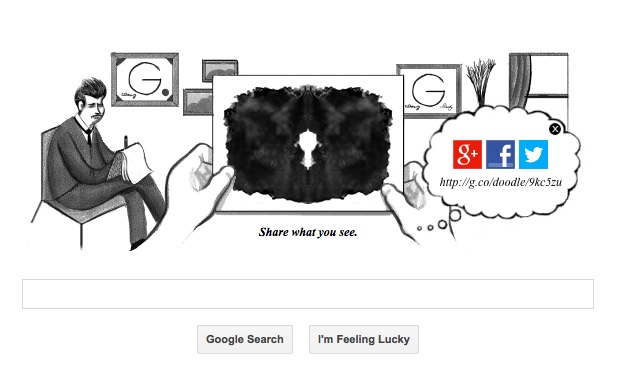 Born on 8 November 1884 in Zurich, Switzerland, Hermann Rorschach was a Freudian psychiatrist and psychoanalyst, best known for inventing a projective test known as the Rorschach inkblot test.

The inkblot test - or the Rorschach test - is a psychological test using which a person's interpretations of inkblots are recorded and assessed through psychological interpretation, complex algorithms, or both. The test is used by psychologists to analyse a person's personality traits and emotional functioning. It's also used for detecting underlying thought disorders, especially when individuals are hesitant to talk about their thinking processes openly.

Friday's interactive Google doodle honouring Hermann Rorschach features different inkblot patterns that can be browsed by clicking on them or on the navigation array keys. The doodle also features a 'Share what you see button' that allows you to share your interpretation of the inkblot on Google+, Facebook and Twitter. The doodle also features a sketch of Hermann Rorschach sitting and making notes.

Hermann Rorschach was fond of klecksography, the art of making inkblots  since his school days. He later studied under the guidance of eminent psychiatrist Eugen Bleuler. He first started psychoanalysis through inkblots by analysing response of school children to inkblots. Rorschach wrote a book called by the name of Psychodiagnostik in 1921, which is said to be the basis of the inkblot test. He studied and researched 300 mental patients and 100 control subjects for the book.

It is said that after experimenting with several hundred inkblots, Hermann Rorschach shortlisted a set of ten for their diagnostic value.

Rorschach died of peritonitis, which was likely due to a ruptured appendix, on April 1, 1922 at a young age of 37, just an year after writing Psychodiagnostik.

Nvidia CEO praises Android, calls it the most 'disruptive' OS in decades
Samsung careers dream jobs for South Koreans, and key to a good marriage: Report