Grilled cheese with a tech twist in San Francisco 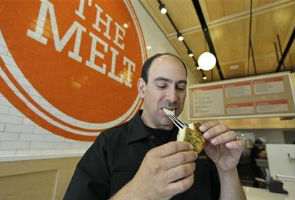 Highlights
Jonathan Kaplan made it easy for consumers to shoot cheesy home movies when he founded the company behind the Flip Video camcorder. Now, he's hoping to popularize something cheesier - and gooier - by starting a chain of grilled cheese restaurants that combine fast food with high tech.

Kaplan's latest creation, The Melt, opens its first location Tuesday in San Francisco's SoMa neighborhood. Plans are in the works for two more restaurants in San Francisco and one in nearby Palo Alto by Thanksgiving. With financial backing from a venture-capital heavyweight, Sequoia Capital, Kaplan hopes to open 25 to 50 restaurants within the next year and about 500 across the country within five years.

No matter how much people like grilled cheese, Kaplan's plan is audacious, considering the state of the economy. Still, he believes building this kind of business makes sense, particularly during a time of uncertainty.

"Economically, it's a good time right now because people want comfort food," he says, seated on a stool at one of the bar-height tables at his bright white-and-orange-hued eatery.

Kaplan was flipping around the idea for The Melt even before the creation of the Flip Video, which the company he co-founded, Pure Digital, began selling in 2007. About 10 years ago, Kaplan says, he started researching grilled cheese to see if it could become the main food attraction for a national chain. As part of his research, he solicited customers' opinions about the sandwich at the giant Mall of America in Bloomington, Minn. He was buoyed by their responses.

Kaplan was convinced a grilled cheese chain could succeed, but there was one big sticking point: How do you make the sandwiches consistent when you have hourly employees - who aren't professional chefs - behind the counter?

Not sure how to solve this problem at the time, he put his plan on the back burner. In the meantime, he started Pure Digital. The company's Flip Video, a simple, low-cost, pocket-sized video camera, paved the way for an entire market. In 2009, Cisco Systems Inc. bought Pure Digital for $590 million as part of an effort to branch out from its core business of making computer networking equipment. Kaplan became general manager of Cisco's consumer products division.

But Kaplan left Cisco in February. Two months later, Cisco discontinued Flip Video and shut down Pure Digital as it gave up in part on its goals for the consumer market. Kaplan decided it was time to give grilled cheese a go.

With a small group of advisers - including chef and restaurateur Michael Mina - Kaplan approached Swedish home appliance maker Electrolux about making a special contraption that would create uniform grilled cheese sandwiches. They came up with a machine that combines two induction burners, a microwave and non-stick pads, which allow the bread to toast while the cheese melts - without squishing the sandwich as a panini press might do.

Not surprisingly, given Kaplan's background, technology also comes into play in the way visitors can order their meals. If you don't want to wait in line, you can order on a smartphone using The Melt's website. After placing an order, you receive a QR code - a cousin to the traditional bar code, but with more data encoded in a smaller space. You bring that to a code reader in the restaurant for scanning, and an employee then gathers up your order.

When The Melt has more locations up and running, customers will be able to choose where to redeem their codes, Kaplan says.

He believes the technology in use at The Melt will improve the customer experience, "rather than technology that is just there for marketing reasons or technology for technology's sake."

Besides the traditional grilled cheese sandwich and tomato soup, The Melt's menu, at launch, features such variations as aged Gruyere on white wheat and smoked Gouda on eight-grain bread. Soup options include spicy black bean and creamy wild mushroom. Prices run $3.95 or $5.95 for a cup or bowl of soup, respectively, $5.95 for a sandwich. The restaurant offers soup and sandwich combos for $8.95.

In a sampling of some sandwiches, the cheese was flavorful and gooey, while the bread was somewhat crisp and airy. Soups, meanwhile, tasted rich, but not too thick.

NPD Group restaurant analyst Bonnie Riggs says Kaplan's idea sounds interesting, but she warns that the restaurant industry overall has just gone through "the most prolonged period of weakness we've ever experienced" with eight straight quarters of declining customer traffic.

Kaplan, however, is confident that hungry consumers will catch on to The Melt.