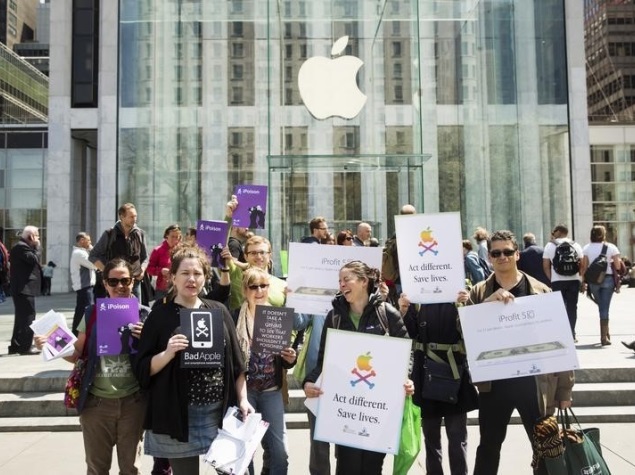 Apple Inc, criticized in the past for greenhouse gas emissions, use of toxic materials and the hiring of underage workers, has improved its practices and earned better scores from groups such as Greenpeace. That's good news for environmentally-aware mutual funds that hold Apple for another big reason - it makes money.

The Cupertino, California-based maker of the iPhone, the world's biggest public company by market capitalization, has adopted a slew of green policies such as expanded product recycling and using solar power at its data centers. For managers who have made it a favorite of the largest "green" mutual funds tracked by Thomson Reuters' Lipper unit, the improvements bolster the appeal of a stock that's risen 15 percent this year, 19th best among the Standard & Poor's 100 index.

Tursich's biggest holding is Google Inc, which he bought only after it made progress on renewable energy, reflecting how top U.S. corporations are embracing green goals, and how the funds jump on those firms once they start making those environmental moves.

Environmental fund managers may be broadening their shopping lists in part because they have more money to deploy: For the 12 months ended April 30 investors put $1.9 billion of new money into the 72 funds tracked by Lipper that use environmental criteria in their investment decisions. That's still tiny relative to the $247.6 billion that went into all U.S. equity funds, but represents a 5 percent inflow that Lipper research head Tom Roseen said was significant. The bulk of the new money, more than $1 billion, went into the dominant $9.5 billion Parnassus Core Equity Fund, Lipper said.

Apple is the top holding of the Parnassus fund, which bought most of the shares in 2013, the year the fund rose 34 percent and beat 72 percent of peers, according to Morningstar. Through June 13 the fund was up about 7 percent in 2014, beating 87 percent of peers.

Apple is also the top holding of the $2.9 billion Calvert Equity Portfolio and the $118 million Green Century Balanced Fund, and is the third-largest stock in the $2 billion Pax World Balanced Fund, according to the funds' latest filings.

Fund managers cited a mix of reasons for warming up to Apple, including reforms pushed by Chief Executive Tim Cook and the stock's outlook. It is up 15 percent in 2014 through Monday on enthusiasm for its iPhones and other pending products, as well as a stock split and a dividend increase.

Apple had taken hits from activist groups like Greenpeace, which in 2010 called it "very weak" on climate and emissions matters, and has faced scrutiny over the hiring of children at factories that make its products.

It also earned a bottom score of "4" on its carbon footprint from the Boston sustainability advocacy group Ceres. Ceres Senior Manager Kristen Lang said Apple had not released enough information to get a better score, such as making public its targets for reducing greenhouse gas emissions. Google received a higher score of "2" from Ceres, which praised its spending on renewable energy.

Among other things, Greenpeace said Apple was moving too slowly to stop using hazardous materials like polyvinyl chloride plastic - often used to insulate electrical cables and brominated flame retardants in its products. Critics worried both materials could be released from products during use or when older computers or power cords are disposed in landfills.

In recent years, however, Apple has made changes and improved its image with environmentalists. In April, Greenpeace called Apple a leader for things like powering data centers with solar arrays, wind farms and water. Ceres' Lang said Apple might get a higher score currently based on steps it has taken since data for her groups' report was collected last fall.

In addition, Apple this year reported a sharp decline in number of underage workers it hired at its supplier facilities.

Asked about the Ceres score, Apple spokesman Chris Gaither said the company powers 94 percent of its global corporate facilities with renewable energy, up from 35 percent in 2010. "Of course, the cleanest energy is the energy you never use, and that's why we've made efficiency such an important feature in Apple facilities and products," he said.

Unusual suspects
Many of the environmentally-aware funds tracked by Lipper have bought other stocks that may not appear green at first glance - like McDonald's Corp, oil driller National Oilwell Varco Inc, and lubricant maker WD-40 Co.

Most of the funds also have broad mandates that allow them to go well beyond owning only windmill-makers, and consider other matters, such as firms' practices on hiring women, in their investment decisions. Also, many specialized environmental companies are small in terms of their total market capitalization, limiting the role they can play in big portfolios and making them more important for smaller and more narrowly focused "green" funds.

Ceres gave McDonald's a low score of "4" on its carbon footprint, saying it had not set formal targets to reduce greenhouse gas emissions and increase its use of renewable energy. It gave Disney a slightly better score of "3" in the area, since the company set an emissions-reduction target.

Neither McDonald's nor Disney responded to requests for comment.

"Companies of this scale are always going to have issues," said Calvert Senior Vice President Bennett Freeman. "What we look at is, what is the strength of their commitment, their willingness to address problems."