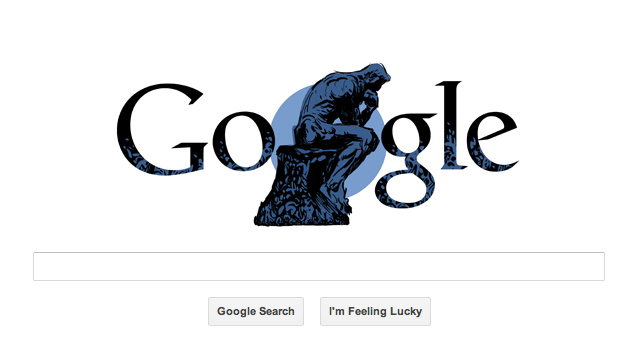 Monday's Google home page pays homage to the French sculptor Auguste Rodin on his 172nd Birthday. Auguste Rodin was born in November 12, 1840 in Paris into a working-class family.

Rodin was always fascinated by art and took up drawing when was ten years old. When he was 14 years of age, he enrolled himself at Petite École, a school that specialised in art and mathematics where he studied drawing and painting for three years.

After passing out from Petite École, Rodin applied to take admission in the Grand École art college in Paris but failed to do so even after three attempts. After his rejection, he completely gave up the hope of being an artist and joined Catholic order. There he met Saint Peter Julian Eymard, who was the founder and head of the congregation. He was one of the first to spot the talent in Rodin and motivated him to get back to his sculptures.

Encouraged by his appreciation and support, Rodin created his first sculpture with the subject The Man with the Broken Nose, which was displayed in 1864. The scultpure featured a head that was "broken off" at the neck, the nose flattened and crooked, and the back of the head was completely absent. Needless to say, it was not very well received by the critics.

The Man with the Broken Nose this and the few other sculptures that followed failed to get Auguste Rodin any recognition. Despite the initial setbacks and criticism, Rodin never changed his style and slowly his work started to get noticed. By 1900, Rodin had become a world famous artists and some of his notable works included The Age of Bronze, The Thinker, The Three Shades, and The Kiss.

Later Auguste Rodin came to be regarded as the founder of modern sculpture and the Google doodle today features his sculpture The Thinker. The Thinker is a marble and bronze sculpture, which is now on display at the Musee Rodin in Paris.

On the personal front, Rodin met his partner Rose Beuret in 1864. Though both of them had a son, they did not formally get married for the next fifty three years (till  1917), just two weeks before Rodin's death.

Auguste Rodin died on November 17, 1917 because of lung congestion. A cast of The Thinker was placed next to his tomb in Meudon; it was Rodin's wish that the figure serve as his headstone and epitaph.