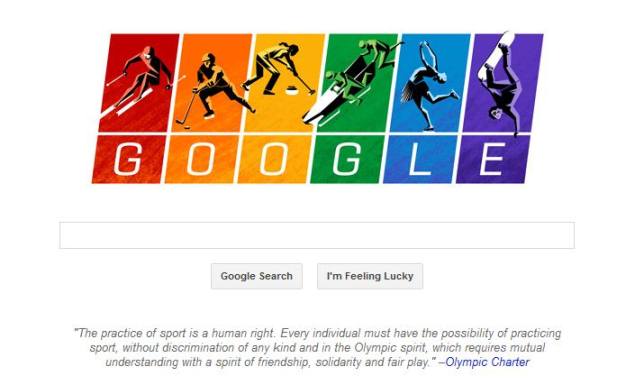 Google is flying the gay flag on a second straight day with the Olympic Charter doodle continuing to find a place on its home page. Google's doodle that invokes Olympic Charter's call for equality is unchanged from the one seen on Friday, perhaps the first time a doodle has been carried forward to a second day without any change.

Google has traditionally carried a new doodle every day of the Olympics, like it did with Beijing Olympics, but it will be interesting to see if the Olympic Charter doodle stays unchanged for the duration of the winter Olympics, which run until February 23.

The Olympic Charter doodle showcases the flag, with the excerpt serving as an online rebuttal to Russian Deputy Prime Minister Dmitry Kozak, who warned spectators and athletes against promoting gay rights during the Olympics, saying it was forbidden by the Olympic Charter and Russian law to spread propaganda during a sporting event.

Beneath the Rainbow Flag was the following paragraph attributed to the Olympic Charter:

"The practice of sport is a human right. Every individual must have the possibility of practicing sport, without discrimination of any kind and in the Olympic spirit, which requires mutual understanding with a spirit of friendship, solidarity and fair play."

Clicking on the doodle triggered a search for news related to the Olympic Charter, with stories about what was being interpreted as a Google protest of an anti-gay atmosphere caused by officials in the host country of Russia.

Amid growing furor over Russia's new law forbidding the dissemination of "gay propaganda" to minors, Kozak once again argued that there was no discrimination based on sexual orientation in Russia.

President Barack Obama told US Olympic host broadcaster NBC he had included openly gay athletes in the US Olympic delegation to show the United States would not accept discrimination in sport or anywhere else.

One day ahead of the official opening of the Games, UN Secretary-General Ban Ki-moon made a powerful call for equality, saying "we must all raise our voices against attacks" on gays.

Google ordered to display 'we were fined' notice on its French search page
NSA collects under 30 percent of all US phone data: Reports