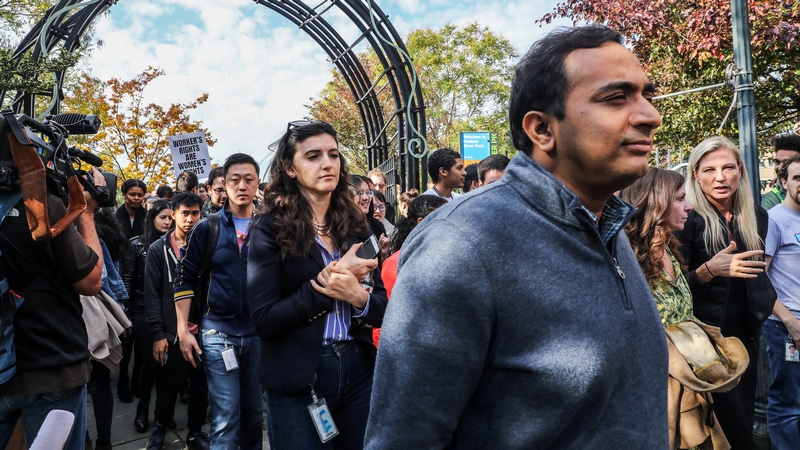 Workers leave outside 14th street park after walking out as part of the global protest in New York, US

Thousands of Google workers walked out of offices around the world to protest how the tech giant has handled sexual misconduct by some of its top executives.

Starting in Asia and spreading across Europe, photos posted with the #Googlewalkout began flooding Twitter as employees gathered outside Google offices in Zurich, Dublin, Singapore, London and Hyderabad, India.

In the US, walkouts around the country began at 11:10am in New York, including at Google's Manhattan offices and in Atlanta. The employee group, Google Walkout For Real Change, said 47 offices worldwide were participating in the walkout Thursday.

The mass walkout was sparked by a recent New York Times report that said Google gave millions of dollars to some executives in secret exit packages after they were accused of sexual misconduct. The article, published last week, said Andy Rubin, the brainchild of the Android mobile software, was given a $90 million (roughly Rs. 660 crores) exit package after the company verified a misconduct claim against him was credible.

Rubin said in response to the report that he "never coerced a woman to have sex in a hotel room. Also, I am deeply troubled that anonymous Google executives are commenting about my personnel file and misrepresenting the facts."

On the same day the report was published, Google's Chief Executive Officer Sundar Pichai and Eileen Naughton, vice president of people operations, tried to reassure staff saying in an email that the company was "dead serious" about ensuring it provided a "safe and inclusive workplace." They said that Google had fired 48 people without pay for sexual misconduct over the past two years.

This wasn't enough for Google employees, who took to social media to express their fury and arranged the protest.

Streams of Google employees poured out of buildings at the company's Mountain View, California, headquarters at 11 a.m. local time and headed toward the heart of the campus. The crowd was silent. One man held a sign that simply said, "5 Demands."After a few minutes, a woman chanted "fight for women, fight for workers," over a bullhorn. She said they were sending a message to leadership. The crowd of several hundred employees cheered.

"We're here because we want an equal and fair workplace for all," Sadia Nahreen, a Google employee, said in an interview. "I was surprised by the reports.''

Earlier in New York, hundreds of Google employees streamed out of the office in Chelsea and gathered in Hudson River Park, attracting dozens of onlookers, a swarm of television cameras and police officers. Thomas Kneeland, a software engineer at Google in New York, said he took part in the protest because "letting executives walk away with bucketloads of cash after a sexual misconduct allegation" is immoral and should be stopped.

"We act like these are problems that can never be solved, but we are Google - we solve the world's problems everyday," Kneeland said. "We should be able to make a dent in this."

Speaking at a conference in New York not far from Google's offices, Pichai said he had apologized to employees and personally supported the walkouts. The company needs to do better than it has in the past, he said.

The lack of women in tech is part of the issue, he said. "There needs to be a deeper look at something that's more systematic.''

The employee movement that arranged the walkout is calling for these changes:

End forced arbitration in cases of harassment and discrimination. A publicly disclosed sexual harassment transparency report. A "transparent and inclusive process" for reporting sexual misconduct "safely and anonymously." The chief diversity officer should answer directly to the CEO and make recommendations to the board, An employee representative on the board. A commitment to end pay and opportunity inequity.

Another New York-based employee, Phillip Schanely, a line-level manager, said "most of the office," which counts thousands of employees, took part in the protest, almost all leaving their desks in unison.

"Mostly, I just wanted to show the world that this isn't us - what's in the news is not what I see, it's not who I am and it's not the people I work with," Schanely said. "It's not Google." Jessica Suarez works as a product specialist for the tech giant and said she walked out because it was unjust for workers to find out about secret multimillion-dollar exit packages through the media. "I've been at Google for four years now and the thing I like about it is how open the culture is," Suarez said. "This feels like a betrayal of the culture."

The movement appears to have swelled in support in the days after the group first announced the walkout.

"It quickly became clear that their concerns were very widely shared," said Temple University labour law professor Brishen Rogers. "The number of workers who walked out is far, far greater than people had predicted a few days ago. Basically, the protest went viral, and people moved into offline action quickly."

Rogers said the Google walkout resembled the teacher strikes earlier this year. Those started in West Virginia, where teachers protested stagnant pay and school funding, and spread across the country to states like Oklahoma and Kentucky, forcing policy changes and shifting state politics.

The Google walkout "is yet another example of how collective action can help remedy sexual harassment and discrimination," Rogers said.