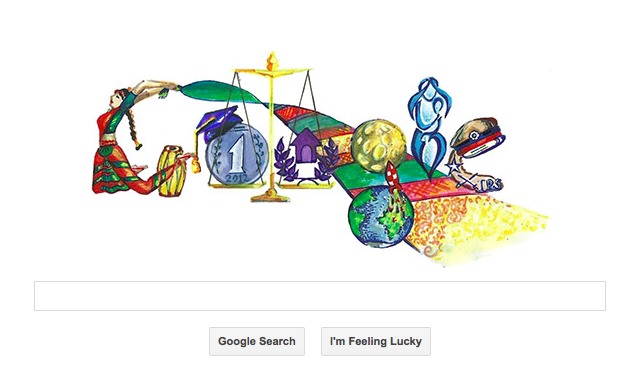 Doodle 4 Google 2013's winner is being featured on the Google home page in India on the occasion of Children's Day. The winning entry is by a class 10 student from Pune.

Doodles are the decorative changes that are made to the Google logo to celebrate holidays, anniversaries, and lives of famous artists and scientists.

The doodle titled "Sky's the limit for Indian women" has been designed by Gayatri Ketharaman for the fifth edition of Doodle4Google competition with the theme celebrating Indian women.

"Each letter of the doodle depicts the trait of Indian women. She is graceful and elegant, adept at balancing work and home. She is a go-getter and also personifies motherhood," said Gayatri Ketharaman, a student of Bishop's co-education school in Pune.

The winner was selected from among 12 finalists chosen from different parts of the country by the national jury comprising actress Kirron Kher and political cartoonist Ajit Ninan.

"The theme this year is something so powerful and rich, so it has really enabled the youngsters across the country to showcase their talent and also bring to life the incredible diversity of the Indian women," said Kirron Kher while awarding the winner.

Along with the national winner, three students grouped into different categories were also awarded.

Madhuram Vatsal from Lucknow won the prize in Class one to three category, while Binita Biswajeeta from Odisha with her doodle 'Women are future, empower them better' won in Class four to six category, and Akash Shetty from Bangalore with doodle titled 'Indian women leading our country' won in the Class seven to ten category.

"The competition is the perfect platform for the Indian youth to showcase their talent on an international platform. It allows youngsters not only from the metro cities but tier II, III and even IV to participate, which is evident from the entries seen this year," said Rajan Anandan, managing director, Google India.

This year the competition received 1.5 lakh entries in the contest held across 100 cities and 1,500 schools.