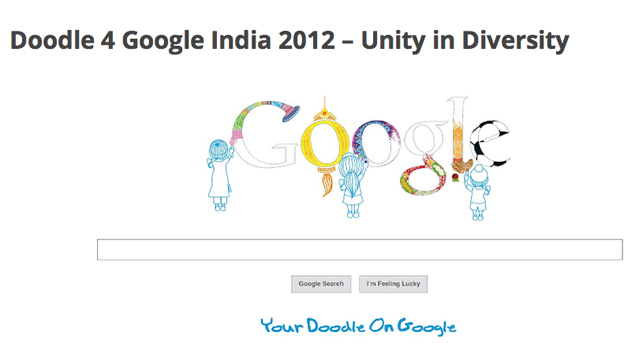 Google is known to have celebrated practically every special occasion ranging form birthdays and anniversaries to events like the Olympics across the globe with creative doodles on its home page.

Come this Children's Day, the search giant is inviting children between the ages of 5 to 16 years to participate in the Doodle 4 Google competition for 2012 with the theme of 'Unity in Diversity'. The contest will be extended to over 40 cities in the country and the winning doodle will be announced at an event in New Delhi on November 6. It will also be featured on the Google India homepage on November 14. All 12 finalists will receive a tablet and a Google kit.

This year, Google will shortlist three candidates from four zones: North, South, East and West. Post the first round of preliminary judging of entries from these regions, a total of 12 entries, chosen by a panel of esteemed judges, will then be put to a public vote that will be the basis of selecting one winner from each group.

The Jury along with the original Google Doodler will then choose the final winning Doodle from amongst the 12 finalists. The 12 best Doodles will be displayed in the Doodle 4 Google gallery www.google.co.in/doodle4google.

From the 100,000 entries Google received last year, the winning doodle was a creation by Varsha Gupta of Ryan International School, Greater Noida. She had doodled the letters Google depicted by various Indian musical instruments, staying true to the 2011 theme.

Announcing this year's competition, Nikhil Rungta, Country Marketing Head, Google India said, "Doodle 4 Google is a great opportunity for students to explore the intersection of art and technology, while sharing their talents and creativity on a national scale. Through this program we hope participants will have fun, think creatively and learn something new all at the same time. Last year's winning Doodle by Varsha Gupta, from Delhi NCR, showcased in vivid detail that India is a land of different cultures, and music is an integral part of it. This year we expect the children of India to showcase to the world how India is united in diversity."