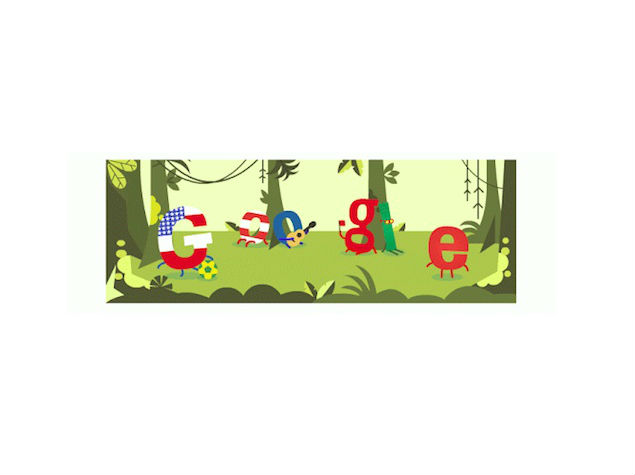 Google has chosen to doodle the United States vs Portugal match, which took place on Sunday at the Arena Amazonia in Manaus.

The United States vs Portugal match is not the first time that Google has done a doodle specific to a match happening between two countries during World Cup 2014. It had also done a doodle celebrating Miroslav Klose's celebration following his goal against Ghana on Saturday and also another one that saw Cristiano Ronaldo take a free kick outside the 'D' only to see the letters of the word Google scrambling away, leaving the 'E' to guard the goal. While both the doodles were country specific, (the second one being visible in India too) Monday's doodle is a tribute to the thriller that USA and Portugal played out on Sunday.

The Monday's World Cup 2014 Google doodle is set in the Amazon rain forest (understandably, since the stadium is located at the edge of the Amazon) and has fans of both the teams. While the first three letters are rooting for the USA the other three are for Portugal. However it is only the first 'G' and the last letter 'E' who are passing the green and gold ball back and forth. The two letters supporting the USA (both the 'O's) are seen strumming on guitars, while the second 'G' and 'L' are seeing waving a Portuguese flag, and idling under a tree.

Apart from Monday's United States vs Portugal doodle, other football-focused doodles from Google include the 'keepy-uppies' doodle on Thursday, and the dribbling doodle on Friday.

The Google's World Cup 2014 doodle number 26 that depicts the USA vs Portugal match reaches out to almost all the parts of the world outside parts of East, West and North Africa. Clicking on the doodle shows search results for the United States vs Portugal match, along with live scores and schedules for upcoming games, and more news from the Fifa World Cup 2014.

The United Sates vs Portugal match turned out to be a contest of sorts at the World Cup 2014. While USA was looking to win the game to qualify to the next round, Portugal was looking to stay alive (after the 4-0 mauling in its first game against Germany). Portugal took the lead in the fifth minute with a goal by Nani, and the match stayed at 1-0 till Jermain Jones found an equaliser in the 64th minute.

USA were set to coast to the next round after captain Clint Dempsey helped take the lead in the 81th minute. However, the United States vs Portugal match wasequalised in thrilling fashion in the last minute of injury time with 30 seconds left on the clock, to keep Portugal's hopes alive in the tourney, and drawing the match.