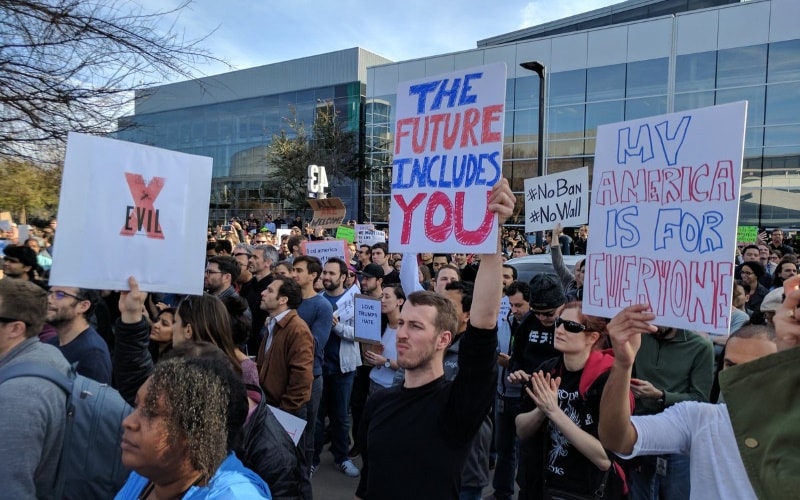 Many tech companies criticised the order, which was signed late Friday. Pichai sent a note to Google staff that day, saying 187 employees were potentially affected. Google asked those employees overseas to return immediately, pledging to help with the logistics and handle the costs.

Pichai told the assembled employees on Monday that the issue is "at the core of the founding of this company," according to a Google employee there. "We spent two hours this morning talking about all of this. There is large work that remains to be done." Brin talked about his refugee past. Part of a Russian Jewish family, he emigrated to the US because of anti-Semitism in that country.

Some of the Google employees affected by the immigration order also addressed the crowd. Soufi Esmaeilzadeh, a Google product manager, was one of them. An Iranian-born Canadian who has lived in the US for 15 years, she was preparing to travel from Switzerland to the US when news of the coming executive order first arrived.

She contacted Google's Internet immigration team to check if she should end her trip early. The team got back in touch and explained her dire situation. Based on the way the executive order was phrased, they advised Esmaeilzadeh not to return to the US because she might be instantly deported.

Then, at 4am Swiss time on Saturday, Google's lawyers called Esmaeilzadeh again in Switzerland and told her to fly to San Francisco. A federal judge had temporarily blocked the executive order, allowing her to return on Sunday, she told her co-workers at Monday's protest. Google booked her on what it deemed was the safest route, with layovers in Dublin and Boston. She got home on Sunday.

Amy Pannell @amypies83 So proud to be a part of this amazing company #GooglersUnite #NoBanNoWall Twitter: Amy Pannell on Twitter

Several people at Google had raised concerns about the company's response to Trump's policy at a company-wide meeting on Thursday, a day before the order was signed, according to people familiar with the matter. At the time, some employees underestimated the severity of the order, thinking it would only impact new visa applications, one of these people said.

The disruption comes at a delicate time for Google. The company, which had close ties to the Obama Administration, is determining its broader policy approach to Trump on a myriad of issues, including net neutrality, taxes and competition law.