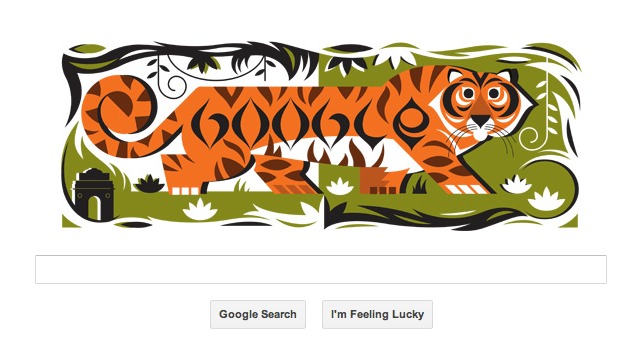 Google has doodled a tiger on the India home page as a mark of respect on the occasion of the country's 64th Republic Day. The Republic Day in India is celebrated as the day India's own constitution came into effect on 26th January 1950.

Republic Day India commemorates the date that the Constitution Of India was enacted and became the document that governed the country. On January 26, 1950, the Indian Assembly's 308 members signed two handwritten copies of the new Constitution, an English and a Hindi version, and two days later the Constitution became the law. Drafted by a committee headed by B R Ambedkar, the Constitution replaced the Government Of India Act Of 1935 that had previously governed colonial India, and declared the country a sovereign, socialist, secular, democratic republic.

The Republic Day India doodle 2013 shows a tiger in all its glory. Last year, the doodle depicted three elephants decked in finery, each with two children and a tricoloured umbrella on the back, a reference to winners of the bravery awards who take part in the Republic Day parade held in New Delhi every year.