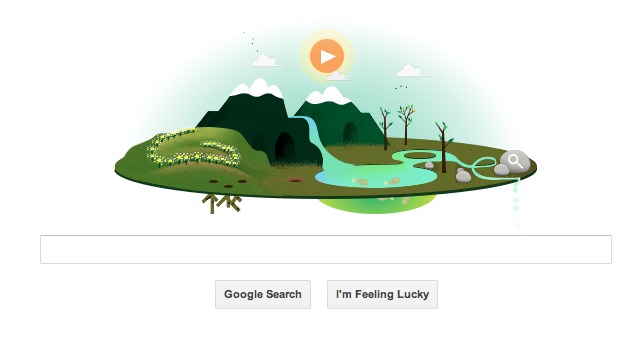 Earth Day 2013 is the subject of Monday's Google doodle across the world.

Earth Day was first celebrated in the US in 1970. The idea was the brainchild Gaylord Nelson, then a US Senator from Wisconsin. Nelson conceived the idea after witnessing the 1969 massive oil spill in Santa Barbara, California. Inspired by the student movement that was going on at the time against the Vietnam war, Nelson dreamt of movement that would make people think about air and water pollution and force environmental protection onto the national political agenda.

Senator Gaylord Nelson announced the idea for a "national teach-in on the environment" and persuaded Pete McCloskey, a conservation-minded Republican Congressman, to serve as his co-chair. He also got Denis Hayes on board as a national coordinator for the event. Hayes did a lot of the ground work, building a national staff of 85 to promote events across the land.

The first ever Earth Day was celebrated on April 22, 1970. An incredible 20 million Americans took to the streets, parks, and auditoriums to demonstrate for a healthy, sustainable environment all across the country. Thousands of colleges and universities organised protests against the deterioration of the environment. Groups that had been fighting against oil spills, polluting factories and power plants, raw sewage, toxic dumps, pesticides, freeways, the loss of wilderness, and the extinction of wildlife, independently till now, suddenly realised they shared common values.

The first Earth Day led to the creation of the United States Environmental Protection Agency and the passage of the Clean Air, Clean Water, and Endangered Species Acts. "It was a gamble," Gaylord said, "but it worked."

Earth Day is now observed in around 192 countries, with activities being coordinated by the nonprofit Earth Day Network, chaired by the first Earth Day coordinator Denis Hayes.

Monday's Google doodle shows the cycle of seasons represented with the rising and falling Sun and Moon in an animated Google doodle. This is Google's 13th Earth Day doodle, with each year the doodles getting more elaborate. You can take a look back at the Earth Day Google doodles over the year.

For more Earth day doodles click here. Or you can see other recent Google doodles.

Google reportedly integrating Google Now with its homepage
Ringing up at a lighter, mobile cash register