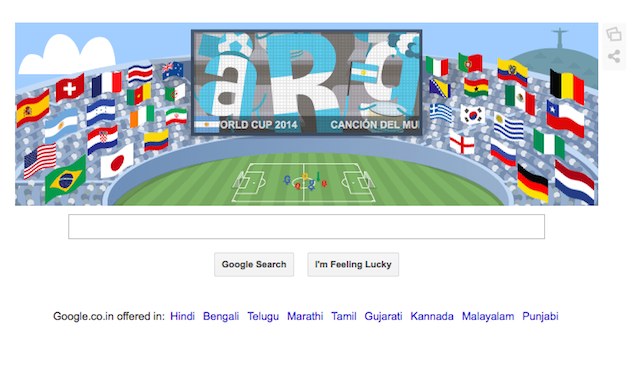 On the day of the Fifa World Cup 2014 final, Google has sought to bring in an inclusiveness of sorts with Sunday's doodle. The doodle number 62 for the World Cup 2014 rounds up the long list of World Cup doodles by reuniting fans from all the 32 participating nations using football as the glue to bind them.

Of course that doesn't mean that the focus has shifted one bit from the Germany vs Argentina final which will be played in less than eleven hours from now at the Estadio do Maracana in Rio de Janeiro. The Germany vs Argentina World Cup final match however, is the focus of the day with both the teams reaching the final in contrasting fashions. Should Germany win the World Cup final, it will be the first time that a European country has lifted the trophy in the Americas.

Google's doodles for the World Cup, might be reaching its acme with the World Cup 2014 final doodle on Sunday, but it began a month ago, when the festive spirit first extended to Rio in the inauguratory doodle. En route it had doodles that represented the opening ceremony, the Mexican wave amongst others. There were doodles to showcase footballing skills like the 'keepy-uppies', dribbling skills and the one-touch football exercise. The prophetic octopus Paul too made an appearance and Google also stirred up a fair bit of controversy with the Favela doodle. The doodle had rocked its boat with a string of football fans labelling it 'insensitive' to make light of the slums in Brazil.

Some of these elements have again been showcased in Sunday's doodle.

The World Cup 2014 final doodle has the six letters of the word playing football in a stadium with the green and canary yellow football also making an appearance as the official match ball of the Google doodles.

Fans from across the 32 countries are seen cheering for the letters, with a giant screen in the centre showing a magnified view of the match progressing on the pitch, with a ticker running below it. When one clicks on the flags the screen showcases fans (also read as 'Google's minions' ) dressed in the colours of the particular country. Another interesting point is, when users click on clouds on the top left, an image of the late, prophetic octopus Paul appears on the screen.

Similarly, when one clicks on the far right, on the statue of Christ the Redeemer an image of a sunset comes on the screen, with the sun represented by a giant football. The sun sets to give a night time picture of the Rio seascape.

The Argentina vs Germany, World Cup 2014 final match is also a showcase of how contrasting the manner is in which the two teams made it to the final to vie for football's most coveted honour. Germany had been clinical in its gameplay. Barring Algeria, they have run past opposition with near-perfect passing and finishing.

The best example of the same coming in the semi-finals against Brazil, where the hosts were polished off in the biggest ever victory margin in a World Cup semi-final. Argentina, on the other hand, advanced to the finals after a penalty shootout game involving the Netherlands.

The World Cup 2014 final doodle is visible across the world, except in parts of East and West Africa. The closing ceremony prior to the Germany vs Argentina World Cup 2014 Final will feature Shakira, Carlos Santana and Ivete Sangalo celebrating the spirit of football.

The month long tryst with the World Cup has culminated for Google in a doodle that has reunited the fans and the 32 participating nations. What remains to be seen is whether Google will create a final doodle for the winners on Monday.

3D Print a Nebula at Home, Thanks to Nasa
Samsung Considers Its Counterattack as Rivals Erode Cellphone Profit