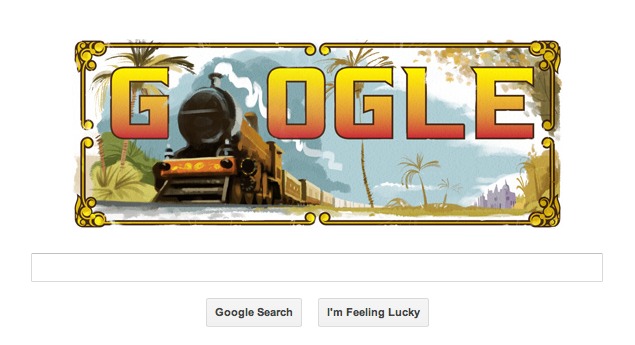 160th anniversary of the first passenger train in India is the subject of Tuesday's Google doodle.

The history of rail transport in India goes all the way back to 1832, when a plan for a rail system in India was first put forward. The first rail line in the Indian sub-continent came up near Chintadripet Bridge (in modern-day Chennai) in 1836 as an "experimental line". In 1837, a 5.6 km long rail line was established between Red Hills and the stone quarries near St. Thomas Mount.

However, it wasn't until 1853-54, when two new railway companies, Great Indian Peninsular Railway (GIPR) and East Indian Railway (EIR), were created, that the railways as we known it today began to take shape. GIPR was asked to setup near Mumbai, and EIR was to setup a railway line near Kolkata (Calcutta at the time). Thus, the first train in India became operational on 22 December 1851 for localised hauling of canal construction material in Roorkee.

16 April 1853 was the historic date when India's first passenger train journey took place between Bori Bunder in Mumbai and Thane. Covering a distance of 34 kilometres, it was hauled by three locomotives, Sahib, Sindh, and Sultan.

The Google doodle celebrates the 160th anniversary of this journey - rather inaccurately some might say - by depicting a single steam engine lugging a train towards the reader. The front part of the engine form the first 'O' in Google.